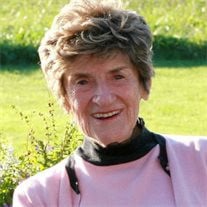 Marjorie (Marje) Wellman Bullock died peacefully at her home on February 7th in Juno Beach, Florida at the age of 92. Born July 19th 1920 in Newton, MA to Ruth (Rainier) Kingman Wellman and Arthur Ogden Wellman. She was the eldest of their three children. She was pre deceased by her brother, Arthur (Bud) O. Wellman, Jr. Her other brother, John (Jack) G. Wellman lives in Pawley's Island S.C. She grew up in Newton Center, attended local schools and graduated from The Beaver Country Day School, Chestnut Hill, MA in 1938. She attended Wheaton College in Norton, MA, class of 1942. She then further continued her education at The Katherine Gibbs Secretarial School in Boston. Throughout her life, she summered in Little Compton, RI. It was there that as a teenager, she met the love of her life, her forever sweetheart, George (Bill) B. Bullock, Jr. On May 1, 1942 they were married at The Trinity Church in Newton Center, Massachusetts. Her married life began in Newton Center where, in addition to starting her family of three children, she also volunteered as Treasurer for The Florence Crittenden League of Boston. In the late 1950's, she and family moved to Weston, MA and lived there for 10 years. In the 1960's she again moved, this time to Johnsonville, SC where her husband was needed for his work in the textile industry. She and Bill built a fine home and established a 139-acre farm. Marje managed the farm while also being active in local causes and giving back to the community. She was President of the Johnsonville Garden Club of America. She was a supporter and volunteered at The Tara Hall Home for Boys. When Bill retired in 1979, they moved to Florida to enjoy golf. They built a lovely home in Jupiter Hills, where they welcomed family and friends. In 2000 they moved to a beachfront condo in Juno Beach. They travelled extensively including a world trip that was sponsored by The Museum of Natural History in New York. Together they enjoyed adventures on numerous cruises and trips throughout the world. During her life she enjoyed golf especially at The Sakonnet Golf Club where she was a member for about 80 years. She was a fine bridge player and enjoyed playing with friends in RI and at The Everglade Club in Palm Beach, FL. She became computer literate in her early 80's. During her lifetime, she also created extraordinarily fine needlepoint that she gave to friends and family and which are cherished as enduring keepsakes. Both she and her husband are generous benefactors and philanthropists. They established the Marjorie W. and George B. Bullock, Jr. Fund to benefit The Rhode Island Foundation. Continuing in the tradition of her father, Arthur O. and his wife (Gullan M.), they established research fellowships at The Wellman Center for Photomedicine at Massachusetts General Hospital in Boston. She loved her friends and family and especially her beloved husband. She is survived by her son, William G. Bullock and wife Pam, of Florence SC, daughters Marjorie R. Bullock of Provincetown, MA and Monterey, CA and partner Nina Harrison and Elizabeth W. Bullock and husband Stephen M. Jordan of Little Compton, RI. Three grandchildren, Jason Nathaniel Cobb, son of daughter Elizabeth, died at age 6 in 1975. William G. Bullock, Jr. and wife Dixie, of Charleston, SC and Rebecca M. Rubin and husband, Kenneth P. of Rehoboth, MA. She also leaves 4 great grandchildren, Jade, Iris and George B. Bullock, III of Charleston, SC and Alexander W. Rubin of Rehoboth, MA. The family would also like to express their deepest gratitude to Barbara Turnipseed for her 30 plus years of dedicated help, assistance and support. The family would further like to thank Marje's wonderful health team. She enjoyed a long and joyful life. A memorial service will be held on a later date at The United Congregational Church in Little Compton, RI. In lieu of flowers, donations can be made in Marje's memory to Bullock Fellowship, Wellman Center for Photomedicine at Massachusetts General Hospital, 100 Cambridge Street, Suite 1525, Boston, MA 02114 or to Jupiter Medical Center Foundation, 1210 South Old Dixie Highway, Jupiter, FL 33458 or online at www.jmcfoundation.org.

Marjorie (Marje) Wellman Bullock died peacefully at her home on February 7th in Juno Beach, Florida at the age of 92. Born July 19th 1920 in Newton, MA to Ruth (Rainier) Kingman Wellman and Arthur Ogden Wellman. She was the eldest of their three... View Obituary & Service Information

The family of Marjorie Wellman Bullock created this Life Tributes page to make it easy to share your memories.