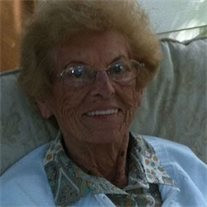 Marie Lucille "Lulu" Borglund, 90, of Jupiter, Florida passed away on May 20, 2014. Born in Victoriaville, Quebec on May 14, 1924 she was the third youngest of 19 children of Arthur and Maria Lambert. She is survived by her son Roland Borglund and his wife Susan of Jupiter, Florida, her daughter JoAnn Frick and her husband Michael of Brunswick, Georgia, her Grandchildren, Ryan Borglund of Sitka, Alaska; Erik Borglund of Johns Island, South Carolina; Miss Taylor Borglund of Jupiter, Florida; LCDR Matthew Frick, his wife Janelle and their children Jade and Gavin of Woodbridge, Virginia; Michael Frick of Gainesville, Florida and his son Benjamin Frick of Savannah, Georgia; David Frick of Loganville, Georgia; and Rebecca Pfaller and her husband Joseph of Gainesville, Florida. She is also survived by her sisters, Therese Bonneau, of East Hartford, Connecticut; Beatrice Czapla of Newington, Connecticut; and Marie Claire Wolfensdorf and her husband Edward of Broad Brook, Connecticut; her brother-in-law Sven Borglund and his wife Madeline of Centerville, Massachusetts; and by numerous nieces, nephews, friends and neighbors. She was predeceased by her husband John Walter "Doc" Borglund, a career Naval Officer in the US Navy Submarine Service. She grew up in Rockville and Hartford, Connecticut and was married in June of 1944. Over the years, with her husband and children, she lived in Maine, New Hampshire, Massachusetts, Rhode Island, Connecticut, New York, Pennsylvania, South Carolina, Georgia, Florida and California. Upon her husband's retirement in 1970 from the Navy, they settled in Connecticut and were both active in the Submarine Veterans of WWII. When her husband died in 1982, she relocated to Jupiter, Florida where friends will remember her attending numerous soccer games, swim meets and flea markets. Visiting hours and memorial service will be held at Taylor and Modeen Funeral Home, 250 Center Street in Jupiter, Florida on Tuesday, May 27th at 5PM with service to begin at 6PM. A family funeral will be held later this summer at Arlington National Cemetery in Washington, DC where she will be laid to rest, with Military Honors, next to her husband. In lieu of flowers, the family requests donations in her honor be made to the Submarine Force Library and Museum, One Crystal Lake Road, Groton, Connecticut 06340.

Marie Lucille "Lulu" Borglund, 90, of Jupiter, Florida passed away on May 20, 2014. Born in Victoriaville, Quebec on May 14, 1924 she was the third youngest of 19 children of Arthur and Maria Lambert. She is survived by her son Roland Borglund... View Obituary & Service Information

The family of Marie Lucille Borglund created this Life Tributes page to make it easy to share your memories.