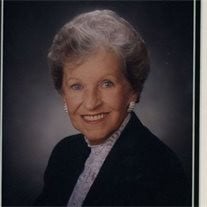 Marian V. Lewis Obituary Jan 2, 1929 – May 23, 2011 Our beloved, Marian V. Lewis, a resident of Palm Beach County since 1952, passed away peacefully at her home on Monday, May 23, 2011, after an extended battle with Radiation Heart Disease. Born in PA in 1929, Marian spent the majority of her life in the great state of FL. Mrs. Lewis served as a highly influential business leader in South Fl. for more than 30 years. As the first female business owner, board member and Chamber of Commerce President, Marian was a maverick paving the road for future development and placement of aspiring career women into leadership positions. Marian was an amazing mother of three children and still developed her real estate career in 1968 working for one of Southern Florida’s largest firms. She was promptly promoted to Vice President, immediately becoming a top producer. Shortly thereafter, Marian opened her own office, Marian V. Lewis Real Estate, Inc. Marian was elected to the Fl. House of Representatives in 1986 and served through 1992. She sponsored and successfully passed legislation aimed toward women’s health and divorce issues. She also served as Republican Caucus Vice Chair and the Palm Beach County Legislative Delegation Chair. She served on many charitable boards and established the “Tom Lewis Memorial Nursing Scholarship Fund” at FAU, which is self sustaining. Marian was married to the late U.S. Congressman Tom Lewis, who was also a former member of the Florida House and State Senate. Marian and Tom established a historical milestone being the first husband and wife holding legislative seats simultaneously in the U.S. and State Houses. They were both successful in obtaining funding for State Road US 27 which has, subsequently been named after each of them, “The Tom and Marian Lewis Highway”. Marian’s tenacity and outstanding will to live life sustained her for the past six years. Marian is survived by three siblings, Robert Vastine (PA), Nancy Vastine (FL), and Tom Vastine(PA); three children, Mickey Lewis Bowman (FL) and husband, Dick Bowman, Thomas F. Lewis III (PA) and wife, Kristen Lewis, and Nancy Lewis Heins (FL); six grandchildren; and three great grandchildren. With all the contributions, accomplishments and milestones she achieved, Marian was most proud of her family. She lived an extraordinary life and will be missed very much by her loving family and many devoted friends. Memorial Services will be held on Sunday, May 29, 2011 at 3:00 PM at Royal Poinciana Chapel; 60 Cocoanut Row; Palm Beach, FL 33480-4010. The family has requested contributions to be made to Executive Women Outreach, Inc.; Marian V. Lewis Scholarship; 2300 Centrepark West Drive; West Palm Beach, Fl.; 33409. For online condolences, please visit www.taylorandmodeen.com. Taylor and Modeen Funeral Home Family Owned & Operated (561)744-2030

The family of Marian V. Lewis created this Life Tributes page to make it easy to share your memories.