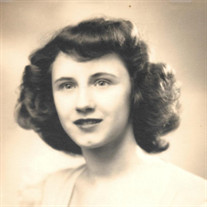 Margaret M. Pack, 93, a long-time resident of North Palm Beach, FL, passed away on August 17, 2021. Her story began in Glen Lyon, Pennsylvania, on March 7, 1928, where she was born into a poor coal mining family to Michael and Stephania Kasprzyk. She excelled in academics and graduated from Newport High School and then went to the University of Pennsylvania where she obtained a degree in nursing. She married her high school sweetheart, Stephen T. Paczkowski, of Alden, PA, in 1950. The Packs made their home in East Brunswick, NJ, with Stephen working for RCA in New York City in finance and accounting. Margaret paused her career as a nurse and reared their four boys; Steven, Michael, Thomas, and Jeffery. The family moved to Florida in 1966 as Stephen was transferred to the newly created RCA computer division in Palm Beach Gardens, FL. Margaret started a long, noteworthy career as a nurse at St. Mary’s Hospital in West Palm Beach. In subsequent years she worked with several doctors in private medical practice. Margaret and her husband were faithful members of St. Clare Catholic Church which was a key part of their social life. She was also a Den Mother in the Cub Scouts. The couple worked hard to make sure each of their children went to college and they sacrificed to paid for it all without assistance. In retirement, she loved frequenting Juno Beach, traveling, playing bridge, and spending time with the grandchildren. Margaret and Stephen were married 67 years up to the time of Stephen’s passing in 2018. Margaret is survived her the four boys and associated grandchildren: Steven and Sharon Pack of Sarasota, FL; Michael and Rosemary Pack of Orange Park, FL; Thomas and Cindy Pack of Boca Raton, FL (Zachary, Joshua, Austin, Stephanie); and Jeffery and Donna Pack of Nashville, TN (Cayce, Rocky.) In lieu of flowers, the family requests that donations be made to St Jude Children’s Hospital.

Margaret M. Pack, 93, a long-time resident of North Palm Beach, FL, passed away on August 17, 2021. Her story began in Glen Lyon, Pennsylvania, on March 7, 1928, where she was born into a poor coal mining family to Michael and Stephania Kasprzyk.... View Obituary & Service Information

The family of Margaret M. Pack created this Life Tributes page to make it easy to share your memories.