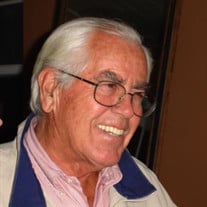 Luis Fernando Vial Browne Born 5 May 1930 Died 8 May 2022 A descendant of the first president of Chile, Luis Browne was born in Viña del Mar, Chile to Luis Browne Fernandez, a leading Chilean architect, and Carmen Vial Freire. Luis spent his early childhood in Chile and moved to London with Carmen’s second husband, Octavio de Señoret, ambassador to Great Britain. Upon de Señoret’s death in 1941, Carmen joined the Chilean Diplomatic Corps and she and Luis were sent to the United States. In 1950, Carmen married Stephen Olin Dows of Rhinebeck, N.Y., a muralist and war correspondent. Luis attended the Fessenden School, Milton Academy, and Balliol College, Oxford before joining the United States Marine Corps. After completing recruit training at Parris Island, S.C., he was designated a drill instructor. His recruit platoons won honors as best in class several times, and he was selected for Officer Training School. As such, he became a United States citizen. Upon his discharge from military service, Browne enrolled at Harvard College where he met Edith Gammack of New York. They were married in 1957 at St. Patrick’s Cathedral in New York City. They had three children, Olin, Luis Jr., and Jeremy. Browne became an investment banker in New York for a few years before moving his family to Washington D.C. in 1961 to join the newly established Inter American Development Bank. His duties were funding infrastructure in Central and South America and he was selected as a representative of the IDB to Venezuela and Jamaica. Luis and Edith divorced in 1971. Luis met Nathalie Kuhn in Washington D.C. and they married in 1974 on the North Shore of Massachusetts. Upon his retirement from the IDB, Luis and Nathalie returned to Luis’s roots in Chile to run the family dairy farm, which they turned into a showpiece of Chilean milk production. In the mid 1990’s, Luis and Nathalie returned to the United States to be closer to their families and settled in Tequesta, FL. Luis is survived by his three sons, Olin Browne (Pam), Luis Browne Jr., and Jeremy Browne (Sharon), two grandchildren, Olin Browne Jr. (Katherine) and Alexandra Browne, and two great grandchildren, Olin Browne III and Anders Browne. As the patriarch of the family, Luis referred to himself as “Browne,” which morphed into the endearing moniker, “Senior,” bestowed upon him by his sons’ friends, and for which he was forever and again known. Luis was always at the center of the storm; he loved his friends, was an avowed animal lover, an enthusiastic fisherman, and passionate golfer. Later in life, he became an avid artist. He loved his devoted wife, Nathalie, of almost 50 years, his sons, grandchildren and great grandchildren, and was dearly loved in return. In lieu of flowers, memorial contributions may be made to a local animal rescue association.

The family of Luis Fernando Vial Browne created this Life Tributes page to make it easy to share your memories.