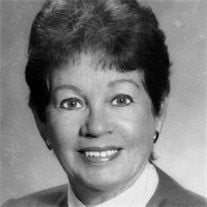 Our Lord took one of his dearest disciples home on Palm Sunday. Lucille L. Lukin, 86, of Jupiter, Florida entered into eternal peace on Sunday, March 29th 2015. Lucy was a prominent member of St. Peter's Catholic Church in Jupiter, Florida. Her ministries included serving as an Extra Ordinary Minister of Holy Communion, a lector, and a greeter. In addition, Lucy was an active leader of the prayer ministries: The Divine Chaplet, The Rosary, and Novena to the Blessed Virgin Mary. Lucy was preceded in death by her beloved husband of 37 years, Lawrence D. Lukin. She is survived by her four children, Donna (Douglas) Wright, Arlene (Steve) Snyder, Lisa (Remi) Johnson, and Christopher (Renee) Lukin. Lucy is further survived by her sister Florence, eleven grandchildren, one great grandchild, nieces and nephews. She will be laid to rest in everlasting peace beside her loving husband in Naples, Florida. Visitation will be held from 6 pm to 8 pm, Monday, April 6th 2015 at Taylor and Modeen Funeral Home in Jupiter. A Funeral Mass will be held at 10 a.m., Tuesday, April 7th, 2015 at St. Peter Catholic Church in Jupiter. In Lieu of flowers a contribution may be made to St. Peter Catholic Church.

The family of Lucille L Lukin created this Life Tributes page to make it easy to share your memories.

Our Lord took one of his dearest disciples home on Palm Sunday....