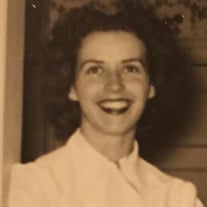 Loretta E. Caden, of Jupiter, FL, died peacefully in her sleep on January 27, 2020. She was 93 years old. Loretta spent her last day on earth doing what she enjoyed the most, having lunch with her daughter at a favorite restaurant on a beautiful South Florida Sunday. The daughter of Loretta and Edward Eichmann, she was born in Philadelphia, PA on August 14, 1926. Loretta graduated from West Catholic Girls High School and worked for the Philadelphia Inquirer before her marriage to John Caden on February 6, 1947. As they chased their American Dream, Loretta and John lived in numerous places, including Illinois, Ohio, Connecticut, New Jersey and South Carolina. During these times Loretta had a number of jobs, most notably working at Bigelow Tea Company in Norwalk, CT. They finally settled in Jupiter in 1986, where Loretta was a long time volunteer at the Jupiter Medical Center. Loretta lost John in 1990, but she remained active and lived on her own until the day that she died. She travelled extensively, often with her dear friend Carlton Powell. She was very active with the Jupiter Pacers and served as their President. Loretta was a devout Catholic. She worshiped St. Jude almost as much as she worshiped Frank Sinatra. She attended Mass regularly. When she was challenged by macular degeneration and could no longer drive, she would still attend a televised Mass every Sunday. Loretta loved dancing and cruise ships; old movies and the big band sound. But the part of her life that she cherished the most was raising her four children. Loretta was the glue that kept her family together. She spoke to each of her children almost every day and kept them updated on each other’s various comings and goings. She was proud of each of them and loved them unconditionally. Besides her husband, Loretta lost her beloved daughter, Colleen Crow, in 2010. She is survived by her children, John Jr. (Linda), Patricia (John), Michael (Lesa) and Colleen’s husband, Mike Crow. “Ret” had five grandchildren, John Daly (Mariah), Erin Carpenter (James), Sean St. Onge (Jessica), Luke Caden (Annie), Jake Caden (Brooke) and 12 great-grandchildren; James Carpenter III, Ella St. Onge, Jack Daly, Caden Carpenter, Teagan Daly, Benjamin Carpenter, Colleen Carpenter, Michael St. Onge, Katherine Caden, Margaret Caden, Elizabeth Caden and Dean Caden. A funeral Mass will be celebrated on Saturday, February 15, 2020 at 11:00 at the Chapel of St. Patrick’s Church in Palm Beach Gardens. Following that service, friends are invited to join the family at North Palm Beach Country Club for lunch. In lieu of flowers and to honor Loretta’s memory, you can make a donation to the Talking Books Division of the Palm Beach Public Library. Better yet, you can take a friend to lunch, raise a glass and remember Loretta with her favorite toast: “No Bad Days.”

Loretta E. Caden, of Jupiter, FL, died peacefully in her sleep on January 27, 2020. She was 93 years old. Loretta spent her last day on earth doing what she enjoyed the most, having lunch with her daughter at a favorite restaurant on a beautiful... View Obituary & Service Information

The family of Loretta E. Caden created this Life Tributes page to make it easy to share your memories.