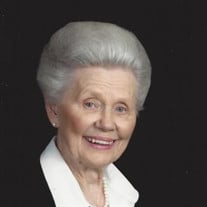 Laura J. Holland of Jupiter, Florida, passed away on January 22, 2020 in Jupiter, Florida, surrounded by her family. She was 96 years old. Laura Sophia Jankowski was born on December 9, 1923, in Midland, Pennsylvania, the daughter of John and Hedwig (Hoffman) Jankowski. After growing up in Midland, Laura enlisted in the U. S. Navy “Women Accepted for Volunteer Emergency Service” program (WAVES) and served her country during World War II. While stationed at Naval Air Station Fort Lauderdale, Florida, Laura met Ed Holland, who was also serving in the Navy as a hydraulic systems technician on TBF Avenger aircraft. Laura was exquisite, tall, blond, striking and vivacious, and Ed was handsome, humorous, and engaging. They fell in love and married on November 8, 1945 in Fort Lauderdale. After the war, Laura and Ed moved to Kingston, New York, then to Sea Cliff, New York, and ultimately settled in Darien, Connecticut. During that time, Laura and Ed began their family. Laura led an active life as an involved parent and parishioner at St. Thomas More Church. She also developed into an excellent golfer, enjoyed quilting, and had a fulfilling social life with Ed in Darien. After retirement, Ed told Laura that he was interested in having a winter spot in Florida, and Laura said that if so, he should go and look around. Ed traveled to Florida and returned to Connecticut to inform Laura that he had purchased a condominium in Juno Beach. It turned out to be a wonderful winter home, and ultimately, Laura and Ed moved to Brigadoon full time. They made many friends there, and flourished in Juno Beach and Madison, Connecticut, where they spent their summers. Laura was predeceased by her husband of 52 years, Edmund Daniel Holland, her sister Barbara Jankowski Puchir and brother Stan Jankowski, and a toddler sister. She is survived by her children, Edmund Daniel (Dan) Holland, Jr. (Catherine) of Palm Beach Gardens, Florida, Roseann (Posey) Holland Griffin (Greg) of Anamosa, Iowa, Patricia Holland Ford of Stratford, Connecticut, and Gerald (Gerry) Arthur Holland (Lisa) of Canton, Connecticut, nine grandchildren and five great-grandchildren. Laura Holland led a full, happy, active, engaged and spiritual life. She was a strong person, physically, mentally and spiritually. She loved her family with all her heart. Laura will live on forever in the hearts of those who loved her. Calling hours will be held at Taylor & Modeen Funeral Home, 250 Center St., Jupiter, FL on February 21, 2020 from 4-6pm. A Mass of Christian burial will be held on Saturday, February 22, 2020 at 11am, at St. Patrick Catholic Church, 13591 Prosperity Farms Rd., Palm Beach Gardens, FL. A private entombment will take place at a later time. In lieu of flowers, donations may be made to the Trustbridge Hospice Foundation; or, since comforting music therapy was provided to Laura and family during her stay, donations may be designated to the Trustbridge Hospice Foundation Music Therapy Program.

Laura J. Holland of Jupiter, Florida, passed away on January 22, 2020 in Jupiter, Florida, surrounded by her family. She was 96 years old. Laura Sophia Jankowski was born on December 9, 1923, in Midland, Pennsylvania, the daughter of John... View Obituary & Service Information

The family of Laura J. Holland created this Life Tributes page to make it easy to share your memories.

Laura J. Holland of Jupiter, Florida, passed away on January...