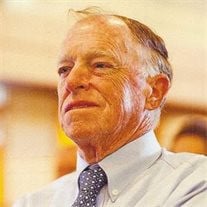 Loving Pop Pop: Our Ace in the Hole. Kevin Stephen Keating, Sr., 70, of Jupiter, Florida and Darien, CT passed away peacefully with his family by his side at his Florida home on February 8, 2013. Born April 23, 1942 in New York City, NY to Martin and Mary Keating from County Clare, Ireland. Kevin was one of eight children and grew up in the Washington Heights section of Manhattan and would always speak fondly of their family summers at Rockaway Beach. Kevin graduated from Fordham Prep in 1960 and continued on to receive diplomas from Manhattan College for chemical engineering, Columbia University for Masters in Chemical Engineering, St. John University Law School and NYU for tax law. Kevin had a 35 year career at Pfizer where he began as a chemical engineer and retired in 2000 as Assistant Treasurer. Kevin met the love of his life, Nancy Fitzpatrick, in 1963 at a St. Patrick's Day dance and they were married on August 20, 1966. After a wonderful honeymoon in Ireland, they settled on Long Island and started their family. In 1981, Kevin and Nancy moved to Darien, CT and retired to Jupiter, FL in 1999. In retirement Kevin enjoyed golf and fishing and traveling with his family. He was a member of Jonathan's Landing Golf Club in Jupiter, FL where he served as President of the Men's Golf Association and President of the Jonathan's Island Homeowners Association as well as on the finance committee of the JL Golf Club. In Darien, Kevin was a member of the Country Club of Darien in Darien, CT and St. John Church in Darien, CT. He taught all how to think clearly, love fiercely, give generously and hug with 3 pats on the back. Kevin is survived by his wife, Nancy Keating of Jupiter, FL and Darien, CT, his two children and spouses, Barbara and John Alter, Kevin and Jennifer Keating of Darien, CT and his grandchildren, Jay, Brian, Catherine, Kaitlyn, Riley and Declan. He is also survived by his siblings Martin Keating, James Keating, Robert Keating, Margaret Volz and Paul Keating. He was predeceased by his parents, Martin and Mary Keating and his siblings Noreen Harris and John Keating. The family will receive friends at Taylor & Modeen, 250 Center St., Jupiter, FL on Monday February 11, 2013 from 2:00 pm -4:00 pm and 6:00 pm-8:00 pm. A mass will be held on Tuesday February 12, 2013 at St. Patrick's in Palm beach Gardens at 10:00 am. A memorial mass will be held at St. John Church in Darien, CT at a date yet to be determined. In lieu of flowers, Kevin has requested that donations be made to Manhattan College at http://www.manhattan.edu/giving/support-manhattan-college/ways-give

Loving Pop Pop: Our Ace in the Hole. Kevin Stephen Keating, Sr., 70, of Jupiter, Florida and Darien, CT passed away peacefully with his family by his side at his Florida home on February 8, 2013. Born April 23, 1942 in New York City, NY to... View Obituary & Service Information

The family of Kevin Stephen Keating, Sr. created this Life Tributes page to make it easy to share your memories.

Loving Pop Pop: Our Ace in the Hole.