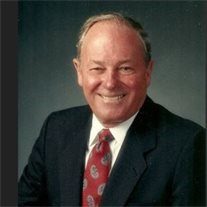 JOSEPH CLARK HAMILTON Born April 2nd, 1924 in Battle Creek MI, resident of Palm Beach Gardens, Joe passed away peacefully on April 27, 2012. A World War II army veteran, Joe served our country with honor, entering combat for the first time on December 24th, 1944 in Belgium (Battle of the Bulge) with the 75th Infantry Division. Awarded the Bronze Star and Purple Heart for Meritorious Achievement; he was honorably discharged, Private First Class, in 1947. After the war, Joe entered Michigan State on the GI Bill, then transferred to Illinois Institute of Technology, where he earned a degree in Mechanical Engineering in 1949. Upon graduation, he went to work for General Electric in Ft Wayne, IN. In 1953 Joe relocated to Chicago to work as a field sales manager for the fledgling company, Advance Transformer, which later became a division of Philips. Always the consummate salesman, Joe's loyalty and dedication to Advance earned him many accolades and promotions during his 36 year tenure; he ultimately retired in 1989 after having served as President. He enjoyed his retirement at Frenchman's Creek, Palm Beach Gardens, FL, continuing his passion for the game of golf, proudly serving as Frenchman Creek's first board President from 1990-91. Joe was an avid reader and enjoyed travelling extensively with his beloved wife, Marilyn. Most of all, he enjoyed the company of friends and family. His grandchildren's many memories of splashing around in the Hamilton pool will always be cherished. Joe is survived by his loving wife, Marilyn, his children Mark, Susan Nelson, Bill, Bruce, Susan Banks, David Goldenberg, their spouses, 11 grandchildren and former wife, Patricia Sommers. He is preceded in death by parents Betsy Clark Hamilton, John Campbell Hamilton, older brother Ian and granddaughter Sydney Lee Hamilton. The family is profoundly grateful to Joe's extended family: Merdel Dennis, Vinette Graham-Turpin, and Crystal Dennis for their devoted, loving care. They also want to thank the staff at Courtyard Gardens of Jupiter for making his final years comfortable. A Memorial Service will be held at 4 p.m. on Sunday, April 29th at the Oceanview United Methodist Church, 701 Ocean Dr, Juno Beach FL 33408. The family requests that in lieu of flowers, memorial contributions may be made in honor of Joseph Hamilton to The Alzheimer's Association (www.ALZ.org) or Hospice of Palm Beach County Foundation (www.HPBCF.org). Taylor & Modeen Funeral Home Family Owned & Operated (561) 744-2030, Jupiter, FL 33458

The family of Joseph Clark Hamilton created this Life Tributes page to make it easy to share your memories.