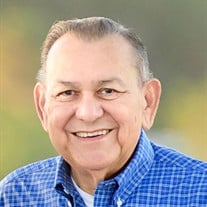 Jose Z. Izaguirre, 84, passed away on Monday, February 21, 2022, surrounded by the love and care of his wife and children at his home, in Jupiter, FL. While he accomplished so much in his life, his greatest achievement is his family legacy. He is survived by his wife of 50 years, Amanda, sons Joseph and Alexander, daughters Karen and Roxanna, and twelve grandchildren: Alessandra, Raquel, Elizabeth, Francisco, Alexander, Spiros, Xavier, Joseph, Christian, Cameron, Dylan and Owen. Jose was born in Puerto Cortés, Honduras before moving to New York City to seek a better life. He valued education and showed appreciation for his opportunities by being disciplined and working hard. Jose believed in himself and inspired those around him to do the same. He and a few of his relatives and friends were the founders of the Honduran Association in New York City. For many years he served as president and organized events to help his fellow Hondurans in the U.S. remain connected. His commitment to community was evident by the numerous fund-raising efforts aimed at sending resources to Hondurans in need and supporting the immigration of new Hondurans seeking opportunities in the United States. He was a patriot, always demonstrating support for New York City, the nation and the armed forces of the United States. Jose was an avid player of Solitaire, Monopoly and, especially Scrabble; and, he really enjoyed going to the movie theatre, so much that it was tradition to go with his children on Christmas Day. He developed a special love for IHOP, inviting his children and grandchildren to join him for his coffee and pancakes. He was the biggest jokester, always making people laugh or poking fun at his family. His humor would shine through the most in the nicknames he gave to his family and friends. He would pick up the phone and answer with “Mrs. Mickey’s residence,” and he called his son Alexander “chanchito” and daughter Roxanna “chanchita.” The viewing is scheduled for Thursday, February 24, 2pm-5pm at Taylor & Modeen Funeral Home, 250 Center Street, Jupiter FL. The funeral service is scheduled for Friday, February 25 at 11am at Taylor & Modeen Funeral Home, 250 Center Street, Jupiter FL, followed by the burial at 1pm at Our Lady Queen of Peace Cemetery, 10941 Southern Blvd, Royal Palm Beach, FL 33411 via procession. There will be a digital livestream during the funeral service. Please click on the following link to join the service: https://view.oneroomstreaming.com/authorise.php?k=1645664548168871

Jose Z. Izaguirre, 84, passed away on Monday, February 21, 2022, surrounded by the love and care of his wife and children at his home, in Jupiter, FL. While he accomplished so much in his life, his greatest achievement is his family legacy.... View Obituary & Service Information

The family of Jose Z. Izaguirre created this Life Tributes page to make it easy to share your memories.