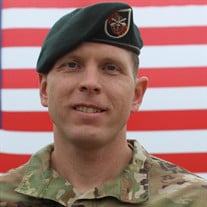 JONATHAN R. FARMER (1981- 2019) Chief Warrant Officer 2 Jonathan Farmer was killed in action in Syria on January 16, 2019. A witness to war and violence in Iraq, Afghanistan and Syria on multiple deployments, he ached for the people suffering, especially the children. Jon was determined to do everything In his power to bring them some measure of peace and to relieve their suffering. It is nearly impossible to sum up the life of this great man in mere words. He held no grudges, finding good men and women among every nation, race and religion. He had also witnessed evil and the hatred it generated. He would try to rid the world of it to the extent he was able. Jon was a Great husband, father, son, brother, friend and soldier. He died for his country but he lived for his beloved wife and children, his family and friends and he served his God. Jon attended Laconia High School in Laconia, New Hampshire for two years and then graduated in 1999 from the Benjamin School in North Palm Beach, Florida. He graduated from Bowdoin College in Brunswick, Maine. He would sometimes say that he carried little pieces of each state with him. He was a fine athlete, playing basketball and baseball in high school and was a Captain of the Bowdoin Basketball Team in his senior year in college. Jon joined the Army in 2005 and enrolled in a rigorous two-year X-Ray course to become a Green Beret. He learned to speak Arabic during that time and worked constantly to master his profession. He was proud to be a Green Beret. He never ceased to marvel at the courage and dedication of so many in the military. He advanced to Assistant Detachment Commander in his unit and saw leadership as responsibility more than privilege. He especially appreciated Kipling’s “If” and its lines “If you can talk with crowds and keep your virtue, walk with kings-nor lose the common touch.” Jon grew up increasingly striving for good character and virtue. He deeply, fiercely and gently loved his wife Tabitha and his four children. He rarely passed up a chance to bring them to Disneyworld just to see the smiles on their faces. He had a special bond with his three brothers, Lt. Col. Matt Farmer, State Department Officer Peter Farmer and writer Andrew Farmer. He loved and stayed close to his mother (Jo Beth) and father (Duncan). He lived life to the fullest, knowing that his job entailed great risk at times, but never letting fear dissuade him from his work and responsibility. Jon treasured his friends and made extraordinary efforts to maintain contact with them. He mentored and helped younger soldiers as he had in turn learned from his own mentors. On more than one occasion he would invite lonely soldiers to join his family during the holidays. The human cost of his loss is in many ways inestimable. If he could talk to us now, he would probably reassure us by echoing the words of Mary Frye: “Do not stand at my grave and weep, I am not there, I do not sleep…. I am the swift uplifting rush of quiet birds in circled flight. I am the soft stars that shine at night.” Jon believed in Heaven. If we could have an advocate with God to steer our own path home, we could do no better than Jon. He would want us to join him, every one of us. And if we do, we would then begin to understand Paul’s question to the Corinthians: “Death, where is thy sting? Oh Grave, where is thy victory?” Mourn Jon’s death, but celebrate his life. Remember Jonathan Farmer. Mass of the Christian Burial will be celebrated for Jon at St. Patrick’s Church, 13591 Prosperity Farms Road, Palm Beach Gardens, FL 33410 on February 18, 2019 at 10:30 a.m. Instead of gifts of flowers, anyone able and willing to donate to Jon’s children’s welfare can make payments to the Jonathan R. Farmer Family Care Trust c/o McDonald Hopkins LLC, 505 S. Flager Drive, Suite 300, West Palm Beach, FL 33401. Online condolences may be offered at www.taylorandmodeen.com

JONATHAN R. FARMER (1981- 2019) Chief Warrant Officer 2 Jonathan Farmer was killed in action in Syria on January 16, 2019. A witness to war and violence in Iraq, Afghanistan and Syria on multiple deployments, he ached for the people suffering,... View Obituary & Service Information

The family of Jonathan Robert Farmer created this Life Tributes page to make it easy to share your memories.