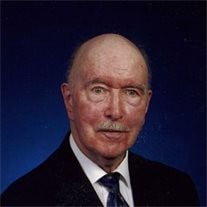 John (Jack) Burgess Young Born May 22, 1919 in Glen Ridge, New Jersey to Charles and Harriet Young. John’s education achievements included Valedictorian of Verona, New Jersey High School in 1936, Brown University, graduated Magna Cum Laude in 1940, and Harvard Business School, graduated with Distinction in 1943. Fraternity Beta Theta Pi: Phi Beta Kappa awarded in his junior year. John served his county proudly in the United States Navy 1943-1945 as Lt. Sr. (USNR). U.S. Diplomatic Service in Brussels Belgium as 3rd Secretary 1948-1950 and San Salvador as 2nd Secretary in 1955. John retired from Bankers Trust Company, having headed departments in Latin America, Canada, U.K. and international institutions such as the U.N., as well as serving as General Manager in the Bahamas. Special Interests have been many and varied – Deacon and Elder in The First Presbyterian Church of Tequesta, FL. Boy Scouts of America, he served as a national director and International Committee for world-wide conferences and jamborees being awarded the Silver Beaver, Silver Antelope and Silver Buffalo as well as the Order of the Arrow. He also served as President of the Eagle Rock Society for the Boy Scouts of America. He was also a member of the Bankers Association for Foreign Trade. An accomplished magician performing world-wide from China to the U.K., and belonging to U.S. Magic Societies: International Brotherhood of Magicians The Society of American Magicians, and was made by the U.K. Magic Circle a member of the Inner Magic Circle with Gold Star as well as the first U.S. representative. While residing in Nassau, Bahamas he served as President of the American Men’s Club from 1983 to 1986. He was married to Laura Braden Young from 1948 until her death in 1997. Their children were twins Charles James Young and Jane Braden Wilkes, and John S. Young. In 1999 Jack married Anita Ann Smith. His proudest achievement was helping put nine grandchildren through universities. His second proudest achievement was assisting his second wife’s grandchildren with their college working days. A Memorial Service will be held at the Waterford on Sunday, June 5, 2011 at 2pm with a reception following. For online condolences, please visit www.taylorandmodeen.com. Taylor and Modeen Funeral Home Family Owned and Operated (561)744-2030

The family of John Burgess Young created this Life Tributes page to make it easy to share your memories.