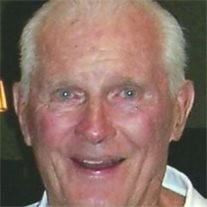 "Jack" age 90, beloved husband of Alice Kelleher Cadwell, passed away peacefully on Sunday, August 21, 2011 at Palm Beach Gardens Hospital withy his family by his side. Son of the late John S. and Hazel Waldron Cadwell, he was born in Danbury, CTY on February 15, 1921. He was a Stratford resident before retiring to Tequesta, FL. jack loved his family dearly. His easy going manner, great sense of humor and infectious laugh were contagious. He had a ready smile and sparkling blue eyes and made friends easily. Always the avid sportsman Jack loved all sports. He continued to ride his bicycle three miles or more a day until age 89 when he had to finally hang it up. he attended Stratford schools graduating from Stratford High School, Class of 1939 where he was a running back for the undefeated north Paraders of 1938. He also starred for the baseball and basketball teams as an outfielder and guard. After Stratford High, Jack continued playing football for the Milford Wheel Club and for the Stratford Holy Name Club. With the Stratford Rams, Jack continued starring as a running back and as the team's punter. He was considered one of the best punters in the state with a special knack of kicking the ball out of bounds inside the ten yard line. In his pro-football playing days he played against the Brooklyn Dodgers of the National Football League and also the New York Yankees professional football team. On the softball field Jack played for the Stratford Elms of 1939. From 1940-1942 he was the chance Vought. in 1941 Chance Vought won the State Championship and went on to play in the National Softball Playoffs in Detroit Michigan. Other teams Jack played for were Page motors, Ganchs Tavern, Mitchell Dairy, Quiquinto's, the Italian American Club and probably a few others. Upon retiring from softball, Jack also umpired ASA softball games and was a member of the Bridgeport Umpires Association for twelve years. he was a member of the Stratford Old Timers Association and received the 17th Golden Crown Award for his outstanding achievements in the sports arena on November 3, 1989. Jack retired from Borden's Dairy after 35 years of service and was a member of the Quarter Century Club. He went on to Avco Lycoming/Textron and continued working until his final retirement in 1985. In addition to his wife of 70 years, he leaves his cherished daughters; Gail Brennan and husband Brian of Jupiter, FL and Barbara McCormack and her husband Raymond of Titusville, NJ; four grandchildren, Barbara Corey, Colleen Harbach, Georgine Johnson , all of Pennington, NJ and John Brennan of Bothell, WA; nine great grandchildren, Rayleen, Tatum and Otto Harbach, Ian, Gavin and Seamus Johnson, Brynn Corey and Keegan and Troy Brennan; sisters, Jean Roy and Olive Andel and several nieces and nephews. He was predeceased by a brother, Frederick (Buster) Cadwell; sisters, Elizabeth (Betty) Davis, Grace Payne and Hazel Benway. Services will be private at the convenience of the family. Taylor & Modeen Funeral Home, 250 Center St., Jupiter, FL. 33458 (561-744-2030) is entrusted with the arrangements. Donations may be made in John's memory to Hospice of Palm Beach County, 3360 Burns Road, Palm Beach Gardens, FL 33410 (561-625-5080),

"Jack" age 90, beloved husband of Alice Kelleher Cadwell, passed away peacefully on Sunday, August 21, 2011 at Palm Beach Gardens Hospital withy his family by his side. Son of the late John S. and Hazel Waldron Cadwell, he was born in Danbury,... View Obituary & Service Information

The family of John R. Cadwell created this Life Tributes page to make it easy to share your memories.