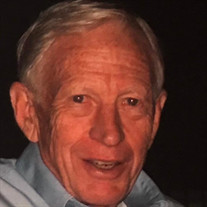 JOHN J. PARKER (JACK) Jack Parker passed away peacefully into eternity with family by his side on Monday, March 15, 2021 at the age of 90 years old. Jack was born in Youngstown, Ohio on July 22, 1930. He was a graduate of Mercersburg Academy and a college graduate of Cornell University as a mechanical engineer, class of 1953. After serving as a First Lieutenant in the U.S. Army, he worked for General Electric and then Lindberg, a unit of General Signal. On December 18, 1959 he married Carol Siegfried of Cincinnati, Ohio. Jack was a past Elder of the Brighton Presbyterian Church in Rochester, NY, past president of the Rochester Chapter of American Society for Metals and past Board member of Hunt Hollow Ski Club in Naples, NY. While living in Rochester, NY he volunteered several years during retirement, for the American Red Cross. He was a member of the Cornell Cayuga Society, the Genessee Valley Club and the Country Club of Rochester. Jack lived in Rochester, NY for nearly 50 years before moving full time to Jupiter, Florida where he was a member of Jonathan’s Landing Golf Club. Jack had many hobbies and interests including, wood working, gardening, squash, tennis, golf, skiing, biking and travels. Carol and Jack traveled by car from the East Coast to the West Coast many times. Jack was a terrific husband, best friend, wonderful and proud Dad and Papa. Jack is survived by his beloved wife Carol of 61 years, his three sons Stephen J. (Martha) of Tequesta, Florida; Philip J. (Isabel) of Shutesberry Massachusetts; Jeffrey R. (Angie) of Tustin, California and four grandchildren, Zachary, Robert, Nicholas and Andrew. Visitation will be held on Saturday, March 27, 2021 from 12:00 pm – 2:00 pm followed by a service to celebrate Jack’s life at Taylor Modeen Funeral Home, 250 Center Street, Jupiter, Florida with Pastor Dan Commerford officiating. Jack will be laid to rest following his funeral service at Riverside Memorial Park. In lieu of flowers donations may be made in his memory to Jupiter Medial Center Foundation, 1210 S. Old Dixie Highway, Jupiter, Florida 33458 and Trustbridge Hospice, 5300 East Avenue, West Palm Beach, Florida 33407.

JOHN J. PARKER (JACK) Jack Parker passed away peacefully into eternity with family by his side on Monday, March 15, 2021 at the age of 90 years old. Jack was born in Youngstown, Ohio on July 22, 1930. He was a graduate of Mercersburg Academy... View Obituary & Service Information

The family of John J Parker created this Life Tributes page to make it easy to share your memories.

Jack Parker passed away peacefully into...