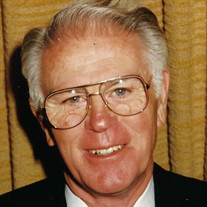 John F. “Jack” McDermott died peacefully in his sleep on Friday, January 11 at the age of 98. Jack was born in New York City on April 23, 1920 to Ida (Hoblitz) and Frank McDermott. From an early age, Jack aspired to a career in aviation, inspired in part by Charles Lindbergh's epic 1927 solo flight to Paris. After graduating from Newtown High School, he entered Columbia University on a Pulitzer scholarship, graduating in May 1941 with a masters degree in mechanical engineering. Upon graduation, Jack began his remarkable 44 year career with Pratt & Whitney Aircraft at its headquarters in East Hartford, Connecticut. A member of the greatest generation, during World War II Jack traveled throughout the country, troubleshooting Pratt & Whitney’s engines at a number of Army Air Corps bases and war plants. In 1945, he married Kathleen Rice McGreevy and the couple settled in Manchester, Connecticut, where their two children were born. In 1958, the family moved to North Palm Beach, where Jack began working at Pratt and Whitney’s Florida Research and Development Center on the Beeline Highway. There he directed the development of engines for the 2000 mph Lockheed SR-71 “Blackbird” spy plane and the McDonnell Douglas F-15 “Eagle” fighter, considered among the greatest achievements in Twentieth Century aviation. Jack was a devout Catholic and a founding member of St. Clare Parish in North Palm Beach, where he served as both a lay reader and extraordinary minister of the Eucharist. Active in his community, starting as the Little League’s head scorekeeper, he went on to be president of North Palm Beach’s Youth Activities, Chairman of the Village Zoning Board of Appeal, a member of the board of the Science Museum and a longtime member of the NPB Library’s “Friends.” Jack is survived by his son William of North Palm Beach and his daughter Joan McDermott and son-in-law Jean Proyet, of Palm Beach Gardens, brother-n-law Bob McGreevy and his wife Mona, of South Londonderry, VT, eight McDermott cousins, and eleven McGreevy nieces and nephews and their families. He was predeceased in 2002 by his wife Kathleen, a founder of the North Palm Beach Library. Kathleen is honored in North Palm Beach's Veterans Park for her WWII service as a Lieutenant jg in the WAVES. A wonderful husband and father, an outstanding aerospace engineer and executive, a true patriot and a man of deep faith, Jack's was a life well-lived. Joan and Bill will forever cherish his memory. A Visitation will be held on Friday, January 18th from 6 PM to 8 PM, Prayer Service at 7 PM at Taylor & Modeen Funeral Home, 250 Center St., Jupiter, FL. A Mass of Resurrection will be held on Saturday, January 19th at 10 AM at St. Clare Catholic Church, 821 Prosperity Farms Road, North Palm Beach, FL. Interment will follow at 12:30 PM at Riverside Memorial Park. In lieu of flowers, the family asks that you consider donations to St. Clare Church and School, or the Friends of the North Palm Beach Library.

The family of John F. McDermott created this Life Tributes page to make it easy to share your memories.