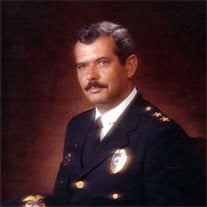 JOHN HENRY JAMASON, 75, West Palm Beach Chief of Police, retired, quietly stepped into the Loving Embrace of God on Saturday June 18th at his home in Tequesta, surrounded by family. He is survived by His Special Love, Joyce Straley; sisters, Doris Abbananto, Elizabeth Jamason; his daughters, Joan Falante (Joseph, deceased), Delia Hoover and Robin (Scott) Johnson; son, John H. Jamason II (April) ;grandchildren, Jacqleen Falante, Meredith Johnson, Ron Cravens, Joseph Falante, Jr., Allyson Hoover, Jamason Hoover, Gabriel Jamason and Liam Jamason. He is also survived by his former wife and Mother of his Children, Anita Jamason, as well as numerous adoring nieces and nephews. He was preceded in death by parents, Harry & Delia Jamason; his brothers, Ben, Kenny, Donald and Lawrence; his sisters, Louise Morris and Joyce Kaulbach; and his grandson Andrew Johnson. He moved to Florida after being honorably discharged from the United States Army with the rank of Staff Sergeant. “Chief” retired as Chief of Police in 1984 after 24 years with the West Palm Beach Police Department where he began his career as a Patrolman and worked his way through the ranks to Major. In 1980 he was selected as Chief of Police from a competitive list of over 150 candidates from across the nation. After a few short years of retirement in Murphy, North Carolina, he was once again called upon and entered public service as the Chief Deputy of the Cherokee County Sheriff’s Department. In 1997 he returned to Palm Beach County to be closer to his family and friends. He spent his last years quietly in Tequesta enjoying his garage and the company of his faithful dogs Murphy and Ginger. Visitation for family and friends will be at Taylor & Modeen Funeral Home located at 250 Center Street in Jupiter, FL from 2 PM to 4 PM and 5 PM to 7 PM on Thursday June 23rd with a memorial service to follow at 7 P.M. In lieu of flowers, the family would prefer donations be made to the Law Enforcement Assistance Foundation, www.leafpbc.org and/or Treasure Coast Hospice, www.tchospice.org/Donate-Now.

The family of John Henry Jamason created this Life Tributes page to make it easy to share your memories.