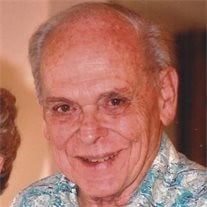 John H. "Jack" Hornstein, 85, returned to his heavenly home on May 25, 2016 in Jupiter, Florida, surrounded by his loving family. He was born on December 23, 1930 in Meadville, PA. He leaves his loving wife, Rose Mary (Trimble) Hornstein, whom he married on June 22, 1957. Together they raised two children, John C. of Charlotte, NC, and Joyce D. Cox (Duncan) of Stuart, FL. They were blessed with two grandchildren, Ryan and Rebecca, both of Stuart, FL. Jack was preceded in death by his parents, Joseph S. and Harriett (Jonas), and his brothers Joseph M. and Charles W. A graduate of Meadville High School, Jack spent his summers at his family's cottage on Lake Edinboro, where he and his brothers were actively involved in many community music shows. After graduating from Edinboro College, where he met Rose, he joined the army in 1953 and spent time in Germany after World War II. In 1957, he and Rose relocated to Conneaut Lake, PA, where they raised their family and lived for 55 years before moving permanently to Jupiter. Jack went to work for his family's business, Meadville Malleable Iron Company (currently Advanced Cast Products), where he worked for 36 years until retirement. Jack and his family spent many happy times at his parent's house on Conneaut Lake, and after retirement, he and Rose were blessed with a close circle of friends with whom they spent many evenings playing cards (Lead a spade, Jack) and enjoying spaghetti dinners. Jack loved sailing on Conneaut Lake, and especially cherished the times spent on his brother's sailboat in Florida. He was an avid lover of Traditional Jazz and Dixieland music, and he and Rose traveled to many jazz festivals around the country listening to their favorite musicians. Above all, Jack cherished his time with his family. Jack was a member of the Iroquois Boating & Fishing Club for over 50 years. He also served on the Conneaut Lake School Board, the Meadville City Hospital Board of Incorporators and was an Elder at Fifth Street Presbyterian Church. Jack was a member of Scottish Rite, Zem Zem Temple and Masonic Lodge No. 408. Professional organizations include Malleable Founders Society, Meadville Management Society, and he served on the Board of Directors of Meadville Malleable Iron Company. A memorial service was held on May 27 at Taylor & Modeen Funeral Home in Jupiter. Details for a memorial service in Conneaut Lake are pending. Memorial contributions may be made to Hospice of Palm Beach County or the Shriners Hospitals for Children in memory of John Hornstein.

John H. "Jack" Hornstein, 85, returned to his heavenly home on May 25, 2016 in Jupiter, Florida, surrounded by his loving family. He was born on December 23, 1930 in Meadville, PA. He leaves his loving wife, Rose Mary (Trimble) Hornstein, whom... View Obituary & Service Information

The family of John H."Jack" Hornstein created this Life Tributes page to make it easy to share your memories.

John H. &quot;Jack&quot; Hornstein, 85, returned to his heavenly home on...