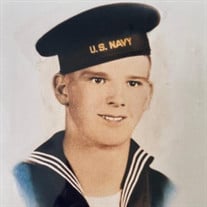 DeLisle, John J. John J. DeLisle of Longmont, CO died on May 14, 2021 in West Palm Beach, FL at the age of 94. John was born to James and Elizabeth DeLisle, nee Curtin, on March 17, 1927 in Lawrence, MA. He married T. Yvonne “Ronnie” Savoy on June 17, 1945, and together they raised six children. John served in the United States Navy from 1944 – 1946, having reached the rank of Seaman Second Class. After being honorably discharged from the U.S. Navy, John worked for Raytheon Corporation until 1989. After his retirement from Raytheon, John discovered his passion for woodworking. He created furniture for himself and his loved ones, including a roll-top desk and several grandfather clocks. John is preceded in death by his parents, his wife of sixty-nine years, Ronnie, his four brothers and two sisters, and his daughter, Bette Jo. He is survived by his daughters Diana DeLisle, Susan Day and Pamela Ryan; his sons Dana and Richard DeLisle; his grandchildren Gregory and Nicholas Day, Danielle, Jonathan, Shawna Lee, and Madison, his nine great-grandchildren, and his nine nieces and nephews. At a yet to be determined date, a funeral mass will be celebrated for John and Ronnie at St. Patrick’s Church in Lawrence, MA, where they were joined in matrimony. They will be interred with their daughter, Bette Jo, in Ridgewood Cemetery, North Andover, MA.

The family of John Joseph DeLisle created this Life Tributes page to make it easy to share your memories.

John J. DeLisle of Longmont, CO died on May...