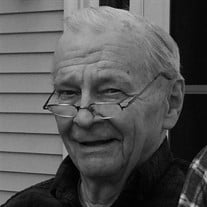 Former insurance executive and passionate student/educator, John Everton Davison of West Hartford, CT passed away on Sunday, February 9, 2020. He began his life, 79 years ago, and passed peacefully last Sunday in the Hartford Hospital. John lived in West Hartford for most of his life and was fortunate enough to marry his kindergarten sweetheart, Dean Sullivan Davison. Together they raised three children: John, Peter and Katie (Kozlowski). John lives in Charlottesville, VA with his wife, Ali, and their two daughters, Emily (Baker) and Abby. Peter and his wife, Paige, are residents of West Hartford, CT where they live with their two boys John Nathaniel, “Nate” and Edward. Katie and her husband Mark (Kozlowski) live in Wheaton, IL with their two boys, Linus and Leo. John E. was the only of child Susan & John C. Davison. He attended Sedgwick School, where he met his future bride, and Loomis High School in Windsor. John graduated Summa Cum Laude from Wesleyan University and received a MBA from Stanford University. Upon graduation, he briefly worked for AeroAir, Stanford University as a case writer & taught at Santa Clara University before returning to West Hartford in 1965 to join the Travelers Insurance Company where he eventually became Sr Vice President. He was with Travelers until he took early retirement in 1992. In 1992, John established a small investment advisory firm that he ran until 2010. John E. was actively engaged in many pursuits. He was an avid reader, played Little League Baseball & youth soccer, was a member of Sigma Chi fraternity and the Commons Club at Wesleyan and was involved in their Alumni Association as Trustee & Head of the Annual Fund. A believer in giving back to his community, John E. taught Sunday School at the First Methodist Church, coached West Hartford Pee Wee football, he was a member and Chairman of the West Hartford Board of Education, President and Treasurer of the Woodridge Lake Association, Noah Webster House board member, a 40 plus year member of the Rockledge Men’s Club & served as its President and Treasurer, a member of the West Hartford Risk Management Advisory Council, a board member of the Ironwood Condo Association and member of the West Hartford Land Trust. The previously schedule celebration of his life has been postponed to a later date yet to be determined. In lieu of flowers, please consider sending donations to: the Foundation for West Hartford Public Schools (www.fwhps.org), The Humane Society (www.humanesociety.org) or the charity of your choosing. For directions and online condolences, please visit www.taylorandmodeen.com.

The family of John E. Davison created this Life Tributes page to make it easy to share your memories.