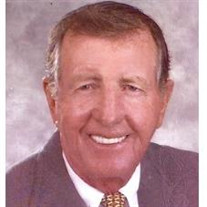 John W. “Jack” Conlin, age 87, died peacefully on January 13, 2019 with family at his side. Jack was born on July, 22, 1931 to John W. & Catherine M. Conlin in Ann Arbor, MI. He attended St. Thomas Grade and High School, lettering in all sports. He then played football for one year at Notre Dame and then the University of Michigan where he graduated with his B.A. in history in 1954. After a two year tour in the army serving in the Far East, he returned to Ann Arbor and University of Michigan law school, where he graduated in 1958. He was a member of the Michigan Bar Association for 60 years. He was one of the early principals in the prestigious Ann Arbor law firm of Conlin, McKenney and Philbrick. There he practiced law for some thirty years. He was also a member of the Florida Bar Association, having practiced in Marathon, Florida for many years. Jack was a great trial lawyer. He was involved in numerous charitable boards and activities, including delivering food to the homeless until very shortly before his death. Jack loved all sports and was an avid golfer, fisherman, bridge player, softball player and history buff. He loved life and lived life to the fullest. One of his more dubious distinctions was that he was the captain of the University of Michigan’s Pocket Billiards team. Jack was a member of the Knights of Columbus (4th degree), the Elks, the American Legion, and the Disabled American Veterans. Jack was a daily communicant. Most of all, he was a great husband, father, grandfather, brother and friend as well as a great character and story teller. He was a genuinely kind and generous man who touched the lives of all he met. He is survived by his talented and lovely wife, Marjorie; daughter Suzanne Conlin; grandchildren John and Colleen; Brothers Judge Patrick (Anneward) Conlin, Robert (Grace) Conlin, Judge Richard (Jean) Conlin, and Sister Mary (Dennis) Dyer. He was preceded in death by his first wife, a lovely lady, Patricia and brother James Conlin. Also surviving is step-daughter Jill, stepson John (Sarah), step grandchildren Elizabeth, Ben and Peter (Thailyr). A Funeral Mass will be held on Friday, January 18, 2019 at 10 AM at St. Patrick Catholic Church, 13591 Prosperity Farms Road, Palm Beach Gardens, FL 33410. In lieu of flowers , a donation can be made to Hospice of Palm Beach County. Jack loved God and his Son, Jesus Christ. Jack bids all goodbye and he will see you in Heaven. A memorial service will be held at a later date in his hometown of Ann Arbor, Michigan.

The family of John W. Conlin Jr. created this Life Tributes page to make it easy to share your memories.