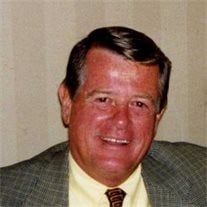 John Campbell Girard, 75, of Jupiter, Florida, passed away March 5, 2012. He is survived by his loving wife of 51 years Sarah (Sally) Girard; their six children: Michael and Karen Girard (Houston, TX) and their children Hayley and John; Megan Girard Clark (Cross River, NY) and her children Ryan, Tierney and Tyler Clark; David Girard (Gurnee, IL) and his children Daniel, Matthew and Jack; Holly and Josh Haskin (Middletown, NJ) and their son Jonah; Timothy and Jackie Girard (Vero Beach, FL) and their children Sam and Mia; Christopher Girard (Chapel Hill, NC); his sister, Gail Dougher (Brielle, NJ); his brother, Bob Girard and his sister-in-law Pat (Villages, FL); and many nieces and nephews. He was predeceased by his sister Carol Simon. Born on March 13, 1936, Mr. Girard was a longtime resident of New Jersey. He grew up in Sea Girt and attended St. Rose High School in Belmar before furthering his studies as a 1960 graduate of Duquesne University of Pittsburgh. After college, John and Sally returned to New Jersey to raise their family. They lived in Middletown, Locust and Basking Ridge before retiring in Jupiter, FL. Together with his father, John L. "Jack" Girard, and his brother, Bob Girard, they started Girard Equipment in 1952. As President, Mr. Girard took great pride in his business, helping to create one of the country's leading Tank Component manufacturers and distributors of Petrochemical equipment. A good golfer with a herky jerky swing and an awesome short game, he will be buried with a lot of his buddies' money in his back pocket! He was a member of Deal Country Club for several years and Jonathan's Landing Golf Club for many years. He loved his dogs, Duffy, Cassie and Hannah, and was a diehard Pittsburgh Steelers' fan. A viewing has been scheduled for Thursday, March 8th, from 6 to 8 pm at Taylor & Modeen Funeral Home, 250 Center St., Jupiter, FL. A mass will be held at St. Peter Catholic Church, 1701 Indian Creek Parkway, Jupiter, FL on Friday, March 9th at 11 am. In lieu of flowers, donations can be made to the Hospice of Palm Beach County, 5300 East Avenue, West Palm Beach, Florida 33407.

The family of John Campbell Girard created this Life Tributes page to make it easy to share your memories.