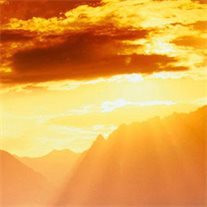 Joan Bernice Welker, age 79, of Jupiter, FL, passed away peacefully on May 27, 2013. Joan was born in Campbell, Ohio, on November 10, 1933 to the late Anna Kutlick Pokabla and Michael Pokabla. She received a bachelor's degree from Youngstown State University in Youngstown, Ohio. Joan then began teaching first grade and met her future husband, William (Bill) Gerard Welker. They married on June 18, 1960 in Youngstown, Ohio. Joan continued her teaching career until the births of her children, William Gerard II (Bill) and Geralyn Ann. Joan's husband's career with Commercial Intertech allowed them to live in Luxembourg at two different points in their lives. Joan treasured her memories of Europe immensely. Joan and Bill were happily married for 49 years. They enjoyed vacations with their children to Ocean City, Maryland, and living near the water in Florida after Bill's retirement in 1995. Joan is predeceased by her husband, William (Bill). She is survived by her son, Bill Welker and his wife, Stephanie Patten Welker of Hobe Sound, Florida; her daughter, Geralyn Walsh and her husband, Brian Walsh, of Arlington Heights, Illinois; her brother, Tom (Mary Jo) Pokabla of Girard, Ohio; her brother,Ted (Barbara) Pokabla of Jupiter, Florida; and loving grandchildren, Patrick Walsh, Annie Walsh, Owen Walsh, and Claire Welker. There will be visitation for family and friends on Saturday, June 1, 2013 from 9:00 - 10:45 AM at Taylor and Modeen Funeral Home in Jupiter, Florida. A funeral mass will be held at St. Christopher Catholic Church in Hobe Sound on June 1, 2013 at 11:30 AM. An entombment will follow the funeral at Riverside Memorial Park in Tequesta at 1:00 PM.

Joan Bernice Welker, age 79, of Jupiter, FL, passed away peacefully on May 27, 2013. Joan was born in Campbell, Ohio, on November 10, 1933 to the late Anna Kutlick Pokabla and Michael Pokabla. She received a bachelor's degree from Youngstown... View Obituary & Service Information

The family of Joan Bernice Welker created this Life Tributes page to make it easy to share your memories.