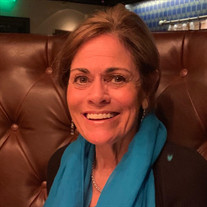 Joan Mattison was born on October 15, 1947 to her beloved parents Joan and Jack Lysaght. She is the first of seven children, followed by Jackie (†), Susan, Tom, Carole, John (†) and Judy. Her family lived in Flatbush Brooklyn and Joan enjoyed a blessed childhood. Her family was active in Good Shepherd Parish, and Joan attended St. Brendan’s Catholic High School. She graduated Fordham University in 1969. On June 6, 1970, after seven years of dating, she married William C. Mattison Jr. (Bill, or to her, Billy). Joan and Bill moved to Plandome, NY in 1975 where they raised a family. They have two sons, Bill and Scott, and they raised them in the same nurturing environment Joan enjoyed. That hospitality extended to their broader families, and all who entered their lives. During this time, Joan was elected a Dame of Malta (1993) and they made two pilgrimages to Lourdes. Joan was also named a Lady Grand Cross of the Order of the Holy Sepulcher (2006). Upon Bill’s retirement they moved to Jupiter, FL where they became heavily engaged with the community, especially at Jonathan’s Landing. Joan is well known in various local bridge clubs. They had been particularly active in the boating community, and made trips on their various boats to both coasts, the Great Lakes, the Caribbean, and even Alaska and the Panama Canal. But they most loved hosting their four grandchildren, Scott’s girls Chloe and Lily, and Bill’s boys Billy and Jack. Joan passed into eternal life peacefully on August 9, at her home surrounded by family. Her wake will take place at Taylor and Modeen Funeral Home in Jupiter, FL on Sunday August 15, the Feast of the Assumption of Mary, at 2-4 pm and 6-8 pm, with a brief service around 6:30 pm. Her Mass of Christian Burial will take place at St. Jude’s Catholic Church in Tequesta, FL at 9:30 am on Monday, with her interment to follow at Our Lady Queen of Peace Cemetery in Royal Palm Beach, FL. The family suggests, in lieu of flowers, donations be made to Jupiter Medical Center Foundation in Joan’s name.

Joan Mattison was born on October 15, 1947 to her beloved parents Joan and Jack Lysaght. She is the first of seven children, followed by Jackie (&#8224;), Susan, Tom, Carole, John (&#8224;) and Judy. Her family lived in Flatbush Brooklyn and... View Obituary & Service Information

The family of Joan Marie Mattison created this Life Tributes page to make it easy to share your memories.