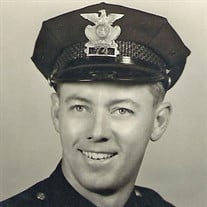 Jupiter - Jesse L. Webb, 97, passed away on January 6, 2018 from natural causes at the Atria of Saint Joseph’s Assisted Living facility where he had been residing since January 2013. He was preceded in death by his wife of forty-nine years, Mary Lou, and his oldest daughter Norma Lee. He leaves sons Earl and David, daughter Victoria, thirteen grandchildren, fifteen great-grandchildren, and his brother Jack. Born in Tifton, Georgia, he was a resident of South Florida since the age of one. He was the son of Thomas Jesse and Ottie Lee Webb. After graduating from the Miami Edison Highschool he attended the University of Florida where he met his future wife Mary Lou. They were married in 1939. After college Mr. Webb worked at several jobs in the local community and was employed by the Railway Express Company in Miami until May 1950 when he was appointed to the position of Police Officer with the Miami Beach Police Department. Mr. Webb had a distinguished law enforcement career and retired as the senior department officer with the rank of permanent Major. Some of Mr. Webb’s civic activities included Chairman of the Board for the Protestant Service Bureau; President-Dade County Association of Chiefs of Police, Member-International Chiefs of Police; President-Kiwanis Club of Miami Beach; President-Tropical Anglers Club; Angling Chairman-Rod and Reel Club of Miami; and President-Stuart Rod and Reel Club. Following his professional retirement Mr. Webb assumed the position of Director of International Marketing with the Al Pflueger Taxidermy / Shakespeare Fishing Tackle Company in Hallandale Beach, Florida. Among many other projects, this company pioneered the introduction of artificial reefs to the global world of angling and conservation. Retirement did not deter Mr. Webb from continuing to be involved in his life-long passion for salt water, light tackle fishing and the protection of this resource. He fished world-wide and was intimately involved in several state and federal fisheries councils and fought resolutely for rules and regulations that would benefit both recreational anglers and the commercial industry. He was a long-time member of the West Palm Beach Fishing Club which, through its foundations, ardently supports conservation efforts. Mr. Webb held or still holds some light tackle world records. In 1975 Mr. Webb moved to Stuart, Florida where he was active in local government affairs and church activities. He continued to explore the wonders of salt water fishing until age and increasing infirmities dictated he also retire from this part of his life. Services will be family and close friends only after cremation and interment. The family has requested donations in lieu of cards or flowers be made in memorial to Jesse L. Webb to the Hospice of Palm Beach County Foundation, 5300 East Avenue, West Palm Beach, Florida 33407.

Jupiter - Jesse L. Webb, 97, passed away on January 6, 2018 from natural causes at the Atria of Saint Joseph&#8217;s Assisted Living facility where he had been residing since January 2013. He was preceded in death by his wife of forty-nine years,... View Obituary & Service Information

The family of Jesse L. Webb created this Life Tributes page to make it easy to share your memories.