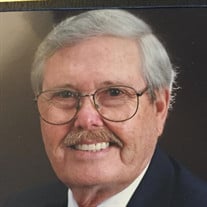 Jesse Norbert Lowery age 86, of Tequesta, went home to be with his Lord and Savior on November 7, 2020. Dad was born on March 11, 1934 to Jesse R. and Annie Liz Lowery in Rochelle, Ga. Jesse Norbert grew up in Pineview Ga. and entered the U.S. Navy in 1952 where he served as a radio operator on serval U.S. submarines. Norb married his beautiful wife Bea in 1955 and earned a Bachelor of Electrical Engineering degree at the University of South Carolina. He then moved his family to Tequesta, Florida and began his lifelong career working at Pratt and Whitney. Norb and Bea raised 4 children in their home in Tequesta and were active members of Tequesta’s First Baptist. Dad was very involved in the Gideons. He traveled to Indonesia to spread the Gospel, spoke in many churches and was the President of the Florida Gideons and served on the state cabinet for many years after. Many, many people were touched by the life that our father lived. He was such a Godly man who was always willing to help others. His children, grandchildren and great grandchildren were the loves of his life. He will truly be missed by all who were blessed to know him. Norb is preceded in death by his loving wife Bea of 57 years his amazing grandson Derrick Nixon, his sister Laverne Tate, his brother Harold Lowery, his sister Juanita Silvia, Curtis Lowery and Elizabeth Lombaugh. He leaves to cherish his memory his sister Barbara (Jerry) Whittington of Georgia; 4 wonderful children son Gary (Dianne) Lowery of Paris TN; daughter Karen Lowery (Steve) Samples of Tequesta FL; daughter Brenda (Dale) Nixon of Jacksonville Fl; daughter Tammy (Bill) Tetrault of Port St. Lucie. Beloved Grandchildren Brian Lowery, Nicole Willard, Rodney Scott Barkalow, Thalassa Crews, Jarrod Nixon, Heather Meyer, Amanda Villanueva, Rachel Friend, Zachary Slutsky; and 17 Great Grandchildren whom he adored. Friends and family may join in a celebration of his life at Tequesta’s First Baptist on Saturday November 14 at 11:00 a.m. with Pastor Mike Richardson. Officiating. Internment will follow in Riverside Memorial Park. In lieu of flowers the family is requesting Memorial donations be made to Gideon International. www.Gideons.org.

Jesse Norbert Lowery age 86, of Tequesta, went home to be with his Lord and Savior on November 7, 2020. Dad was born on March 11, 1934 to Jesse R. and Annie Liz Lowery in Rochelle, Ga. Jesse Norbert grew up in Pineview Ga. and entered the U.S.... View Obituary & Service Information

The family of Jesse Norbert Lowery created this Life Tributes page to make it easy to share your memories.

Jesse Norbert Lowery age 86, of Tequesta, went home to be with...