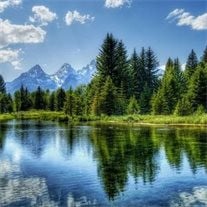 It is with the heaviest heart and deepest sorrow that Jerome Merry "Bubba" Gray, Jr. passed away peacefully on Friday, December 12, 2014. Bubba was born on October 24, 1957 at St. Mary's Hospital and was a native of West Palm Beach, Florida. He attended Lake Park Elementary School, Palm Beach Gardens Middle School and graduated from Jupiter High School where in played football for four years then attended Auburn University. Bubba was an avid hunter and fisherman, part of the Gold Coast Via de Cristo Community and a member of The Crossing Community Church. He was employed by Pratt & Whitney Aircraft for 10 years before following his passion as a mate and Boat Captain where he fished numerous tournaments, including the Bertram Hatteras Shootout and Bahamian Billfish Championships, where they were very successful winning several tournaments. Bubba is survived by his wife, Jeanne; son, Jacob Alvey; parents, Jerome Merry "Babe" Gray, Sr. and Irene Keesecker Gray; great-aunt, Maxine Ford ; aunt and uncles, Grafton (deceased) and Relda Gray, Jerry and Anita Keesecker, Sam and Penny Keesecker (deceased), John and Ann Keesecker, Michael Keesecker (deceased), Conrad and Margaret Lee Keesecker, Howard and Nancy (deceased) Bogart, A.G. (deceased) and Carol Keesecker, Prezzle and Katrinka Quillen, Carl and Theresa Keesecker, and Steven Keesecker, along with numerous cousins, nieces, nephews, in-law family members, close friends and colleagues. He is loved and will be dearly missed by all. There will be a visitation for family and friends on Saturday, December 20, 2014 from 12:00 – 1:00 p.m. at Taylor & Modeen Funeral Home, 250 Center Street, Jupiter, Florida. A funeral service will follow at the funeral home at 1:00 p.m. A second funeral service will be held on Saturday, December 27, 2014 at the Robert Ledford Funeral Home, 720 Ohio Avenue, Erwin, Tennessee, at 1:00 with an interment at the Evergreen Cemetery Mausoleum, 1100 7th Street, Erwin, Tennessee. In lieu of flowers, please bring a gift for Toys for Tots at the service, Hospice of Palm Beach County or make a donation to a charity of your choice in Bubbas' memory.

It is with the heaviest heart and deepest sorrow that Jerome Merry "Bubba" Gray, Jr. passed away peacefully on Friday, December 12, 2014. Bubba was born on October 24, 1957 at St. Mary's Hospital and was a native of West Palm Beach, Florida.... View Obituary & Service Information

The family of Jerome Merry "Bubba" Gray, Jr. created this Life Tributes page to make it easy to share your memories.

It is with the heaviest heart and deepest sorrow that Jerome...