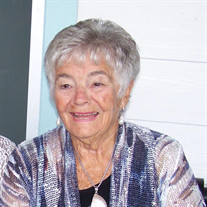 Jeanne "Elinor" Dickinson January 13, 1932 - April 22, 2019 We are extremely sad to say goodbye to our mum, nana, great-nana, little sister, auntie, friend, and neighbor, Elinor, who passed away on April 22, 2019. We will miss her optimism, love of life, devotion to family and friends, and big-hearted ways. Elinor was born in Toronto, Ontario on January 13, 1932, the second daughter of Bert and Mabel (Lucas) Mace. She grew up in Toronto and graduated from the University of Toronto, majoring in Occupational Therapy. In the fall of 1951, she married Ron Dickinson and together they had 3 children, Lynne, Vic, and Anne. During their marriage, the family lived in Toronto, Quebec, New Jersey, Illinois, and California. In 1990, Elinor moved to Jupiter, FL following her divorce. Elinor was employed as the Recreational Director at several nursing homes including The Manors at Hobe Sound and Bishop Grey Inn in Lake Worth, FL. She retired in 1997 and began pursuing her true passions—gardening, golfing, water-walking, and quilting. She was a member of the Martin County Quilt Guild, Out-of-the-Box Art Quilt Design Group, North County Aquatic Center Water Exercise Classes, and the Jupiter First Church. She also volunteered her time as an usher at the Maltz Jupiter Theatre. Elinor loved nature and all creatures. She had a weakness for animals and could never walk away from a stray. She supported humane and animal rescue shelters and conservation, national parks, and wilderness organizations for many years. Elinor is survived by her sister, Gwen Hall; 3 children, Lynne (John) Bigos, Vic (Sherry) Dickinson, and Anne Dickinson; 4 grandchildren, Amy (Ryan) Stolzenfeld, Chris (Katherine) Bigos, Jena (Robby) Wehner, and Carolyn Bigos; and 4 great-grandchildren, Abby Stolzenfeld, Evelyn Bigos, Kaci Stolzenfeld, and Charlotte Bigos. Her life will be celebrated in a memorial service at 2pm on Sunday, April 28, 2019, in the chapel at Jupiter First Church, followed by refreshments. Funeral arrangements are provided by Taylor & Modeen Funeral Home. In lieu of flowers, contributions may be made to Best Friends Animal Society, Busch Wildlife Sanctuary, or Lynn Cancer Institute (LCI) Research.

The family of Jeanne "Elinor" Dickinson created this Life Tributes page to make it easy to share your memories.