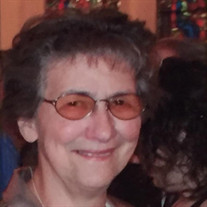 On Tuesday, April 14, 2020, Jeanette MacFarlane, loving mother of six children passed away at 89 years old. Born August 9, 1930 in Paterson, NJ, “Little Jeanette” was the daughter of Tony and Jeanette Vacca. She was preceded in death by her son Mark. She is survived by her son William MacFarlane and his wife Sharon (North Conway, NH), their son Dustin and his wife Liza (Manchester-by-the-Sea, Ma) and her great-grandchildren Ella Jeanette and Conor, their daughter Erin Marcotte and her husband Patrick (Alton, NH) and her great-grandsons James and Colin, her son Daniel MacFarlane and his wife Patti (Jupiter, FL) and her granddaughter Abbi, her daughter Christine Mayes and her husband Dave (Nevada) and her grandson Danny and granddaughter Kim, her daughter Jacqueline MacFarlane and her husband Tom Green (South Lake Tahoe, CA), her grandson Mark MacFarlane and his wife Tejal (Little Falls, NJ) and Mark’s mother Gloria Nuccio, and Jeanette’s youngest son Robert MacFarlane and his wife Nancy (West Palm Beach, FL formerly Wayne, NJ) and her grandson Robert and granddaughter Karly. Jeanette is also survived by her sister Ethel Fortino (Little Falls, NJ formerly Paterson, NJ). She is also survived by her niece Donna Benti and her nephew Bobby Miranda of The Happenings, and many nieces and nephews. Jeanette raised a bunch of longhairs, during the turbulent 60’s, according to David Lyons. She worked as a crossing guard at Memorial School in Totowa, NJ, a waitress and bartender at the Abbey Inn in West Paterson and a bartender at the Wayne Holiday Inn on Rt 46. Leaving bartending, she worked as a grout specialist sub-contractor for Totowa Tile where she often ran into her former bar customers on construction sites. In her retirement she moved to South Lake Tahoe, CA living with her loving daughter Jacqueline and her husband Tom. She passed while wintering in Jupiter, FL with her son Daniel and his wife Patty and her granddaughter AbbI and was comforted by them and her son Robert and his wife Nancy and grandchildren Robert and Karly in nearby West Palm Beach, Fl. Jan was the matriarch of her family. Her home was always open and serving family recipes that were made with love, complimented by ample wine. Her recipe for love lives on in her family. God bless you Mom, say hi to Markie and Aunt Carm

On Tuesday, April 14, 2020, Jeanette MacFarlane, loving mother of six children passed away at 89 years old. Born August 9, 1930 in Paterson, NJ, &#8220;Little Jeanette&#8221; was the daughter of Tony and Jeanette Vacca. She was preceded in death... View Obituary & Service Information

The family of Jeanette Estelle MacFarlane created this Life Tributes page to make it easy to share your memories.