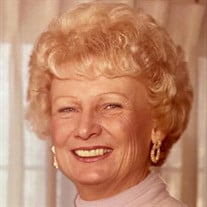 Janet Elaine (Dillstrom) Wrieden passed away November 02, 2021 at the age of 91. Janet is survived by her seven children and their spouses: Frederick and Michelle, Donald and Cheryl, John and Joanne, Robert, Janet Lynn and Bill Novak, Karl and Tina, and Scott and Nancy. She also leaves behind 16 grandchildren and 17 great grandchildren, a niece and a nephew. Janet was preceded in death by her loving husband of 45 years, Frederick William Wrieden Jr. Janet was born on April 03,1930 in Jamaica, NY. She was a graduate of Richmond Hill High School and The School of Modeling in Manhattan and was a statistician with a Manhattan insurance company. She attended the Union Congregational Church where she met the love of her life through church gatherings. Janet and Fred were married in April 1950. They started and raised their family together in Baldwin, Long Island, NY, as well as Gaithersburg, MD and were residents for 42 years in Deerfield Beach, FL. Janet’s greatest love was her family and she was a proud, loving mother of her children, grandchildren, and great grandchildren. Janet and Fred built a legacy of love, caring, strength and compassion that will live on through their family forever. There will be a celebration of her life on January 10, 2022 from 12:00 pm until 5:00 pm. It will be held at The Pelican Club, 1065 No. Hwy A1A, Jupiter, FL 33477. It is open to family and friends. After the celebration of life, the family will honor Janet’s and Fred’s wishes in a private ceremony by combining their ashes and spreading them at sea. We ask that in lieu of flowers, an honorary donation can be made in memory of Janet E. Wrieden to AMVETS at amvetsnsf.org

Janet Elaine (Dillstrom) Wrieden passed away November 02, 2021 at the age of 91. Janet is survived by her seven children and their spouses: Frederick and Michelle, Donald and Cheryl, John and Joanne, Robert, Janet Lynn and Bill Novak, Karl... View Obituary & Service Information

The family of Janet Elaine Wrieden created this Life Tributes page to make it easy to share your memories.