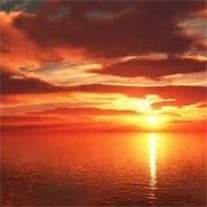 James E. "Jimmy" Williams, 88, of Jupiter, Florida, passed away at his home September 26, 2014. He wanted all to know that he didn't die willingly; he wasn't quite done with fishing, golfing, boating, and teasing his family and many friends. He left for his trip to heaven kicking and screaming but he was excited at the prospect of meeting his Lord and Savior. Jimmy was born July 26, 1926, during a hurricane, in Jupiter, Florida. He was preceded in death by his parents, James and Annie Addison Williams, Sr., sister, Cleo Bassett, and brother, AJ Williams. He is survived by Linda Sue Williams, his wife of 68 years; daughter, Jan (Paul) Herchen of Tequesta, Florida; grandchildren, Trisha (Shawn) Hardin, Christi (Jason) Lovelady, Ryan Herchen; great-grandchildren, James, Piper and Jake Lovelady; niece, Linda Stedem and longtime friend, Mike Elliot. Jimmy entered the United States Navy in March of 1951, where he served for four years. It was while he was stationed in Corpus Christi, Texas, that he met his beautiful wife Sue. Jimmy was very proud of his years of service and was a generous supporter of The Renewal Coalition, formally The Wounded Warriors. Upon his discharge from the Navy he returned to Jupiter and went to work as a sheet metal worker. He joined Boys Roofing in West Palm Beach and found his niche in life. In 1958, with Addis Worley, he founded Jupiter Roofing and Sheet Metal. He expanded his business by buying Carpenter's Roofing in West Palm Beach in 1990. Some of the many projects he worked on include the Contemporary Hotel and The Polynesian Hotel at Disney World; Harriet Himmel Theater, originally the First United Methodist Church, at City Place in West Palm Beach, FL.; Pratt Whitney; the Navel tracking Station on Andros Island; Paradise Island; Cape Canaveral; Emery University Hospital in Atlanta, Georgia; numerous estates in Palm Beach and on Jupiter Island; and many Casinos and hotels in the Bahamas. Jimmy had many hobbies and interests, including flying, water sports, boating, fishing, golfing, boxing and storytelling. He was very proud of his pilot's license and flew many trips to the Bahama Islands. He even crashed his sea plane in the Loxahatchee River. He loved fishing and participated in many fishing tournaments in Florida, the Bahamas, Panama, Costa Rico and Mexico. As a Master Angler, he was a member of The Master Anglers Fishing Club. He loved his many sport fishing yachts, all named Numero Uno, and was a fixture at the marinas throughout the Bahamas, Ocean Reef Club, The Sailfish Club, and the Palm Beach Fishing Club. An avid golfer, Jimmy played at many golf clubs around the county and held memberships at The Tequesta Country Club, and the Turtle Creek Club. As a young man he enjoyed boxing with his buddies and carried that interest with him into the Navy and even after he was discharged. Jimmy never met a stranger. Everyone was his "Bubba". He was generous with his time and resources; always willing to help out a friend or a stranger. Jimmy was blessed through his life's journey with many special friends, family members and co-workers. Please know that each and every one of you played an important role in ushering him home. A visitation and celebration of Jimmy's life will be held at Taylor Modeen Funeral Home, 250 Center Street, Jupiter, FL on Monday, September 29, 2014 from 6:00 pm to 8:00 pm. There will be a graveside service for family and friends at 10:30 am on Tuesday, September 30, 2014 at Riverside Memorial Park in Tequesta. In lieu of flowers, donations can be made to Jimmy's favorite organization, The Renewal Coalition (formally The Wounded Warriors), 88 West Riverside Dr., Jupiter, FL, 33469.

James E. "Jimmy" Williams, 88, of Jupiter, Florida, passed away at his home September 26, 2014. He wanted all to know that he didn't die willingly; he wasn't quite done with fishing, golfing, boating, and teasing his family and many friends.... View Obituary & Service Information

The family of James E. Williams, Jr. created this Life Tributes page to make it easy to share your memories.