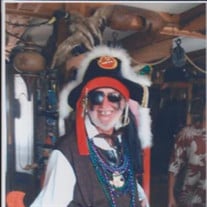 SPARGER, JAMES MASSEY Jim Sparger, 84, of Jupiter, passed away on August 30. He fought a long and courageous battle with cancer and the loss of the love of his life in May of this year. Jim was born in 1935 in Mount Airy, North Carolina, and was raised there. Mount Airy was known as the birthplace of Andy Griffith, besides that of Jim Sparger. Jim was a 1954 high school graduate there. Following graduation, he served in the U.S. Army at the end of the Korean War. He attended UNC-Chapel Hill on the GI Bill. In addition to earning his Liberal Arts degree, the major occurrence of his college experience was meeting his "Mrs. Molly." He gained both a degree and a wife. Jim and Molly Sparger brought their infant daughter Kelley to Jupiter in 1962 to seek their fortune. They found it and never looked back. Jim became a Social Studies teacher at Jupiter High School; a career that lasted 30 years. He was owner and manager of commercial properties in the Jupiter area and a charter member of Jupiter/Tequesta United Methodist Church. A major part of Jim's life was his devotion to music of all kinds. Rock and roll was born in the era of Jim's high school years, and his interests ranged from Chuck Berry to the Beatles to Pavarotti. Although he grew up in a hillbilly area, he came to appreciate that music more in his later years. When Jim was in high school, he was a member of the chorus as a tenor. He also sang in the choir at his Mount Airy church. By the time he was teaching at Jupiter High School, he had been introduced to Motown and Folk. His eclectic tastes in music affected every aspect of his life. An avid reader from an early age, Jim developed a deep interest in all things historical along with national current events. This helped him become the excellent teacher that he came to be. After retiring from teaching in 1992, he often referred to himself as a "professional volunteer" and became involved in his community through JayCees and the Chamber of Commerce (where he served as president in 1971). He helped found Habitat for Humanity Thrift Store as well as home construction for the organization. As a docent at Jupiter Inlet Lighthouse/Loxahatchee River Historical Society, he led tours for many years. In addition, he gave many hours of volunteer time to Jupiter Elementary School. Jim was predeceased by his wife of sixty years, Molly Short Sparger. He is survived by two daughters: Kelley Burns (Vince), Jupiter, and Shannon Sparger, Jupiter; son Todd Sparger (Kim), Port Orange, FL; granddaughters Courtney Sparger, Lauryn Sparger, both of Florida; Shaina Burns of Florida, Erica Burns, of Arkansas; and great-granddaughter Ellie Grace Dietz, Florida, great-grandson Liam Burns, Florida. He is also survived by his sisters Sara Doty, North Carolina; Patricia Loffer (Frank), Arizona; and Lacy Jenkins (Tom), North Carolina; brother George Sparger (Kathy), Miami, Florida; stepmother Betty Jones Sparger, North Carolina, and stepbrother Larry Dinkins (Mildred) Georgia. A memorial service will be held for both Jim and Molly on Saturday, October 24 at the First United Methodist Church of Jupiter-Tequesta. In lieu of flowers, please consider a donation to: Jupiter Elementary “save the auditorium” 200 S. Loxahatchee Drive, Jupiter, FL 33458 or the Jupiter Inlet Lighthouse and Museum, 500 Captain Armours Way, Jupiter, FL 22369.

SPARGER, JAMES MASSEY Jim Sparger, 84, of Jupiter, passed away on August 30. He fought a long and courageous battle with cancer and the loss of the love of his life in May of this year. Jim was born in 1935 in Mount Airy, North Carolina,... View Obituary & Service Information

The family of James Massey Sparger created this Life Tributes page to make it easy to share your memories.