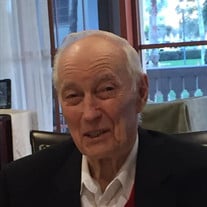 James L. Irwin Jan. 23, 1926-March 29, 2018 James L. Irwin, a World War II veteran and businessman known for his charisma and generosity, died March 29 at his home in Palm Beach Gardens, Florida. He was 92. A 37-year resident of Palm Beach County, Irwin served in the U.S. Coast Guard from 1943-46 and later worked in insurance for 35 years in New Jersey before retiring to Jupiter, Florida in 1981. He was married for 28 years to Jeannie Thomas, who predeceased him in 2016. He was born Jan. 23, 1926, in Hoboken, New Jersey. He grew up during the Great Depression, his life and career shaped by World War II and America’s emergence as a global superpower in the 1950s and 60s. He and his first wife, Jeanette Jantzen, married in 1945 and had four children — Karen, James, Jay Lawrence (Larry) and David. Those who knew him best remember him for his outgoing personality, his enjoyment of a strong martini, his passion for world history and admiration for Winston Churchill. Family and friends recall a firm, sometimes stern man, blue-eyed and clean-shaven, with a penchant for telling stories and an easy baritone laugh. In 1943, at age 17, he attempted to enlist in the Marine Corps, and only was stopped because his age required written permission from a guardian. His parents made a deal that he could enlist in the Coast Guard instead. He served as a petty officer on a U.S. Navy transport, carrying troops to England and France, and then participated in the redeployment of troops from Europe to the Philippines after V-E Day. Irwin was proud of his Scottish heritage, and was known to wear a kilt on celebratory occasions. He read constantly, his bookshelves packed with biographies, memoirs and nonfiction. He collected figurine elephants, and insisted on always having them face the front door, a symbol of good luck. Friends remember him as sharply dressed, and even in his final years he would insist on wearing a collared shirt and dress shoes whenever he arose from bed. He loved to entertain, to take people to dinner or host them at his home. He could work a room effortlessly, his eldest son Jim recalled, fueled by a magnetism that flowed from his lean, handsome 6-foot frame. Here, he was in his element: in a crowd, wearing a sport coat, drink in hand, holding court. He enjoyed taking risks, in life and business. He founded and was president of his own company. He gambled at the racetracks and enjoyed the occasional trip to Las Vegas. He and Jeannie threw big, themed parties that would stretch into the early morning hours. They loved to travel, and made trips to Europe and across the United States. Irwin and two friends once sailed his boat, the “Laurie Ann,” up the Intracoastal Waterway from Jupiter to Long Beach Island, New Jersey. He was a life member of the Veterans of Foreign Wars and the Benevolent and Protective Order of Elks, serving as a Grand Lodge officer. He was a founder of the Elks Lodge of Teaneck, New Jersey. In retirement, he volunteered at Jupiter Medical Center and Palm Beach Gardens Medical Center and was a donor to local and veterans-affiliated charities. He is survived by a brother, Arthur; sons Jim, Larry and David, and their wives Carol, Mary Ellen and Joy; nine grandchildren and five great-grandchildren; stepchildren Robbie, Larry, Ken and Jerry Thomas and Cindy Stuart, and their spouses; 15 step-grandchildren and 26 step-great-grandchildren. A celebration of life for immediate family will be held at La Posada retirement community, 11900 Taylor Dr., Palm Beach Gardens, on April 15 from noon to 2 p.m. In lieu of flowers, the family requests donations to Trustbridge Hospice Foundation.

The family of James L. Irwin created this Life Tributes page to make it easy to share your memories.