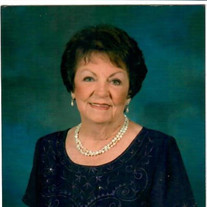 Jacqueline Marie Kelly Miller (nee Labadie) Born in Ecorse, Michigan on April 16, 1934. Passed peacefully on March 7, 2020. Jackie Kelly Miller was a force of nature, and valued most her family, her friends and her faith. Her life reflected that in numerous ways. An excellent athlete and all-round competitor, there wasn’t a sport or a game that Jackie tried in which she didn’t excel. Her primary passion was raising her 4 kids, but she made time to play tennis year-round and was beating her children well into her 60s. She took up golf in her 40s at Pine Lake Country Club and played until the age of 80 winning numerous tournaments and travelling the country with close friends. Jackie loved playing card games with her grandchildren and her many well-loved Bridge partners at Tequesta Country Club. Born and raised in Metro Detroit, Jackie lived in Jupiter, Florida for nearly 40 years. She was known for her love of singing and dancing and her quick wit, which served her well in a raucous and extended family. Her beautiful face, winning smile and charm earned her many friends wherever she lived and traveled. Jackie loved her faith, and at one time even considered entering the Convent after her graduation from Marygrove College in Detroit, Michigan. Her 4 children and 9 grandchildren are extremely happy she reconsidered! She was a long-time, active parishioner at St. Hugo of the Hills Catholic Church in Bloomfield Hills, Michigan and St. Jude Catholic Church in Tequesta, Florida. Jackie was predeceased by her beloved husband of 42 years, Roger J. Kelly; her parents Evelyn and Francis Albert Labadie; her sister Barbara and her brother Gene. She is survived by her second husband Andrew Miller; her daughters, Kathleen Swanson (Phil), Julie Kelly-Detwiler (Peter), Maureen Edmondson (Paul), and her son, Kevin Kelly; her sister and brother-in-law Judy & John Kane; an enormous extended and loving family, and many friends. Jackie’s is a life to be truly celebrated. She leaves a legacy filled with love & laughter, family & faith and of course, lots of games! There will be a funeral mass to celebrate Jackie’s life at St. Jude’s Catholic Church, Tequesta, on Saturday, March 14 at 10:30am followed by a reception at Tequesta Country Club. In lieu of flowers, Jackie asked that donations be made to St. Jude’s Hospital for Children or to Jupiter Medical Center where she received such wonderful care.

Jacqueline Marie Kelly Miller (nee Labadie) Born in Ecorse, Michigan on April 16, 1934. Passed peacefully on March 7, 2020. Jackie Kelly Miller was a force of nature, and valued most her family, her friends and her faith. Her life reflected... View Obituary & Service Information

The family of Jacqueline Kelly Miller created this Life Tributes page to make it easy to share your memories.