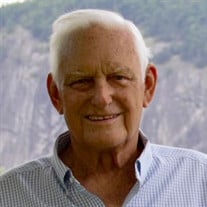 Jack Davis Mathews (82) passed away peacefully Saturday, October 26th. Jack was born in New Orleans, LA on April 18, 1937 and moved to Birmingham, AL three years later. He graduated from Shades Valley HS in 1955 and enrolled in Mechanical Engineering at Auburn University. After graduation, he married Barbara Hobart in 1960. They would have celebrated their 59th wedding anniversary this Christmas Eve. After marrying Barbara, he accepted a job at Pratt & Whitney in West Palm Beach, FL and moved to Tequesta, FL where he lived and worked his entire 42 year career. The highlight of Jack’s career was being recognized by the USAF for his outstanding engine weight support on the F119 Engine Development Program. Jack was gifted in his ability to develop many community projects, including the design and construction of Tequesta’s River Edge Club (1972) and High Cotton Estates (2000) in Highlands, NC. Jack and Barbara had a beautiful family, life, and legacy together that included three children, eleven grandchildren, and four great-grandchildren. He adored his family, traveled to see them often, and loved the genuine relationships they shared together. Jack enjoyed golfing, playing tennis, deep water and local fishing in the Loxahatchee River, world travel, and rooting for his beloved Auburn Tigers. He will be remembered most fondly for his close lifelong friendships, his warm smile and the twinkle in his eye. He fought his illness with courage and remarkable optimism. The best medicine for him was spending cherished time with his family and friends. Barbara was beside him in his last moments just as she was during their entire marriage. He is survived by his wife Barbara, two sons: Scott (Cathy), Steven (Becky), and daughter Kay Moore (Jerry); sisters Margaret Williams (Lewis) and Carolyn Griffin; his grandchildren: Meaghin Svenson (Cole), Kaitlyn Oteri (John), Wes, Hayden, and Jack Mathews; Davis, Blakely, Anne Marie, and James Moore; Griffin and Ansley Mathews; and his great-grandchildren: Kane Svenson; Chase, Charlotte, and Elizabeth Oteri. A Celebration of Life will be held at Taylor & Modeen Funeral Home in Jupiter, FL on Dec. 7 at 2PM, with visitation at 1PM. In lieu of flowers, please consider a memorial gift to either Trustbridge Hospice (5300 East Ave. WPB 33407) or Loxahatchee River Historical Society - Lighthouse Restoration (Attn: Finance Dept: 500 Captain Armour’s Way Jupiter, FL 33469 with donation noted in the memo line).

The family of Jack Davis Mathews created this Life Tributes page to make it easy to share your memories.