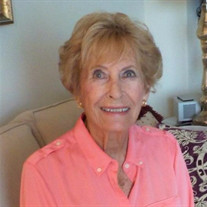 Irma (Haug) McGinn, age 91, passed away unexpectedly at her home in Jupiter, Florida, on Friday, June 14, 2019. She was born in Nashua, New Hampshire on February 9, 1928 to German immigrant parents Carl Ludwig and Gertrude (Staschik) Haug. Irma attended grammar schools Sacred Heart School in Nashua, and Academy of Notre Dame in Tyngsboro, Massachusetts, and graduated from Nashua High School class of 1946. After high school, Irma embarked on a career at the telephone company as a supervisor and instructor. Irma discovered she had a talent for drawing and painting and created many beautiful works of art. In 1952, she married Frank Szylvian, Sr. of Chelmsford, MA. They settled in Brewer, ME, and raised four children. Irma worked in retail until she retired in 1981 and dedicated her time volunteering in local hospitals. After Frank’s passing in 1977, she met and married Vern King. They enjoyed golf, exploring the coast of Maine and wintering in Florida. Vern passed away in 1986. In 1992, Irma married John McGinn from Bangor, ME. They enjoyed traveling to the Caribbean, Europe and many ocean cruises. Irma continued to work on her golf game as a member of Penobscot Valley Country Club in Orono, ME, and Hobe Sound Golf Club, Hobe Sound, FL. They resided in Bangor, ME, and Jupiter, FL. Irma loved the outdoors, gardening and was an animal lover, always feeding the birds and slipping treats to any dog that was in her company. She had a wonderful sense of humor, loved a good joke and was known for her effervescent personality. She was an accomplished cook and well-known for her homemade pies. Irma was an avid reader and enjoyed discussing current events. In 2012, Irma and John moved to Mangrove Bay in Jupiter, FL. Her beloved John passed away in 2016. Irma continued her life at Mangrove Bay, socializing, enjoying cocktail hour and dining with friends. Her most loved activity, however, was spending time with family. She is survived by her three children, Kathleen Curtis and husband Tony Benincasa of Hobe Sound, FL and Lamoine, ME; Frank Szylvian, Jr. and wife Ann Szylvian of Brewer, ME; Barbara Pahigian and husband Cary of Owings Mills, MD. Grandchildren Dr. Chad Szylvian and wife Meghan, Kelsey and Kristina Curtis, and Brendan and Amanda Pahigian, great-grandsons Everett, Ezra and Asa Szylvian, and many nieces, nephews and cousins. She is predeceased by her husbands Frank Szylvian, Sr., Vern King, John McGinn; son Thomas Szylvian, sisters Peggy Haug Moran and Barbara Haug Spaulding. There will be a private service in Bangor, Maine. Donations may be made in her memory to: Trust Bridge Hospice Foundation, 5300 East Avenue, West Palm Beach, FL 33407. TrustBridgeFoundation.org; Telephone: 561-494-6887.

The family of IRMA ANNE MCGINN created this Life Tributes page to make it easy to share your memories.

Irma (Haug) McGinn, age 91, passed away unexpectedly at her home...