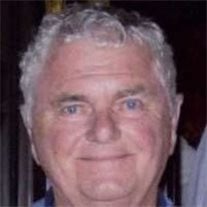 Age 76, of Jupiter, FL, passed away with peace and dignity Thursday, September 15, 2011, at Palm Beach Gardens Medical Center surrounded by the love of his many friends and family. Dr. Flanigan was born in Philadelphia, PA, on January 3, 1935, to Dr. Hugh and Mrs. Helen Flanigan. He was a longtime resident of North Palm Beach and Tequesta, FL, and a summer resident of Boulder Brook Club on Lake Kezar, ME. He graduated from St. Joseph's University in 1962 with a BS. He attended naval flight training at the US Naval Air Station in Pensacola, FL, and was commissioned a Lt. Aviator; Dr. Flanigan was later stationed in Bermuda where he flew multi-engine seaplanes over Atlantic and Caribbean waters. Dr. Flanigan was passionate about aviation and continued to fly after exiting the Navy. He was also a longtime member of the Quiet Birdman Society. In 1968, Dr. Flanigan graduated from the University of Pennsylvania with a DMD and went on to form a private dental practice in North Palm Beach, FL. Dr. Flanigan practiced dentistry in the same location for 42 years before retiring in 2010. Always eager to help those in need, he happily performed countless pro-bono dental procedures over the years for the needy and less fortunate. In addition to the limitless love and kindness he showed his many patients and friends, Dr. Flanigan's most lasting legacy are the eight children whom he adored above anything and whom he is survived by: Hugh Flanigan III, Heidi Tucker, Stephen Flanigan, Mary Helen (Mollie) Allen, Patrick Flanigan, Phoebe McGurik, Jeffrey Flanigan and Jennifer Flanigan. Dr. Flanigan is also survived by nine wonderful grandchildren; his siblings, Barry, Paul and Barbara Flanigan; and his ex-wives, Phoebe Warner Flanigan, Darlene Almeida Flanigan and Randi Drylie. A visitation in honor of Dr. Flanigan will be held Sunday, September 18, 2011, between the hours of 11:00 a.m. and 12:30 p.m., with a service beginning at noon, at Taylor & Modeen Funeral Home, 250 Center St., Jupiter, FL.

Age 76, of Jupiter, FL, passed away with peace and dignity Thursday, September 15, 2011, at Palm Beach Gardens Medical Center surrounded by the love of his many friends and family. Dr. Flanigan was born in Philadelphia, PA, on January 3, 1935,... View Obituary & Service Information

The family of Hugh Berchmans Flanigan, Jr. created this Life Tributes page to make it easy to share your memories.

Age 76, of Jupiter, FL, passed away with peace and dignity Thursday,...