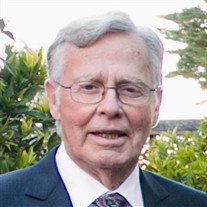 Henry Alexander Bradford (H. Alex), 80, passed away peacefully on Thursday, July 18, 2019 at his home in Tequesta, FL. He was a lover of skiing, sailing, tennis and all things math. Alex was born May 26, 1939 to Dr. and Mrs. Henry Alexander Bradford (Merle Louise Scott) at Henry Ford Hospital in Detroit, MI. Soon after Alex’s birth, the family moved to Denver, CO. In his youth, Alex was a member of the Winter Park Ski Patrol and enjoyed regattas on White Lake in the summer. Alex attended East High in Denver. He graduated with a B.A. in Political Science from the University of Colorado in 1961. A U.S. Army veteran, he served his country for three years as a specialist with headquarters Battery 32nd Artillery Brigade in Kaiserslauten, Germany. In 1967, he received a M.S. in Biostatistics from UCLA. Alex went on to work as a Senior Biostatistician for Abbott laboratories in Chicago, IL. In 1969, he moved to Washington, D.C., where he brought his enthusiasm for knowledge with him as an Associate Professor at GWU’s School of Medicine and as an Assistant Professor at Georgetown’s School of Medicine. In 1971, Alex cofounded Biometric Research Institute, Inc. (BRI) in Arlington, VA. BRI offered research strategy and study design to pharmaceutical and medical device companies. After twenty years as CEO & Senior Biostatistician of BRI, Alex cofounded his second company, BioDevelopment Corp (BDC). BDC, an orphan drug company, developed LAAM, a pharmaceutical approved to fight opioid dependency. In 1995, Alex and his family moved to Tequesta, FL. Here he enjoyed boating with his family, coaching his daughters’ soccer teams, playing tennis, golf and swimming. Alex, a loving husband and father, is survived by his devoted wife of 37 years, Patricia Bradford, and their daughters, Laura Fortner (Chase) and Stephanie Bradford. Alex also leaves behind his caring daughter Lisbeth Moore (Kevin), grandchildren, Patrick and Alana, and his sisters, Alice Degallier and Martha Lindauer. Visitation will be held at Taylor & Modeen Funeral Home, Jupiter, FL on Friday, August 9, 2019 from 12:30PM to 1:30PM. A private church service and burial will follow.

Henry Alexander Bradford (H. Alex), 80, passed away peacefully on Thursday, July 18, 2019 at his home in Tequesta, FL. He was a lover of skiing, sailing, tennis and all things math. Alex was born May 26, 1939 to Dr. and Mrs. Henry Alexander... View Obituary & Service Information

The family of Henry Alexander Bradford created this Life Tributes page to make it easy to share your memories.