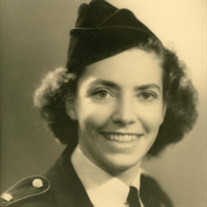 Helen Sprague Hansen Helen Frances (Sprague) Hansen, age 101, of Jupiter, Florida passed away on November 6, 2017. Helen was born on August 29, 1916 in Warwick, New York to Nellie Frances (Baldwin) and George Terberry Sprague. She was preceded in death by her husband, Buddy Leland Hansen of Upland, Nebraska, who died on March 16, 2015. She is survived by son Eric Brian of Mendon, Michigan; son David Alan of Jupiter, Florida; granddaughter Kristin Marie (Hansen) Allen and her husband Richard Freeman Allen of Golden, Colorado; grandsons Jason James Hansen and his wife Carrie Ann Zollner of Caledonia, Michigan and Kent Alan Hansen and his wife Kate Armstrong, of Northfield, Illinois; Great granddaughters Jordyn Brianna and Skylar Faith Allen of Golden, Colorado and Stephanie and Lorelei Hansen of Northfield, Illinois. She was preceded in death by her brother, Lawrence Baldwin Sprague. Helen was raised in Warwick, a small Village in southern New York. She graduated from Warwick High School in 1935 and entered the St. Johns Hospital School of Nursing, Brooklyn, New York. She completed the 3-year program in June 1938, received a Registered Professional Nurse’s Certificate in February 1939, and subsequently worked as a private duty nurse in Warwick. In February 1941 Helen enlisted in the Army Nurse Corps and was stationed for a year at Camp Forrest, Tennessee. She then proudly served her country for 31 months in Australia and New Guinea and participated in the New Guinea, Papuan, and Bismarck Archipelago military campaigns and for a time was assigned to the 363rd Station Hospital in New Guinea. She returned stateside in 1944 and was honorably discharged as a First Lieutenant in November 1945. Helen and her future husband, Budd (an Army Communications Officer) met in Australia during WW II. In fact, unbeknownst to them, they were on the same ship (Santa Paula) steaming from the Brooklyn Navy Yard to Australia in 1942. When they were both stateside, but still in the Army, Helen and Budd married on April 9, 1945 at the Little Church Around the Corner in Manhattan, New York. They travelled west to Corvallis, Oregon where Helen gave birth to two sons. Following Budd’s graduation from Oregon State University in 1949 the family headed back east and Budd landed a job as an engineer for Ternstedt Division of General Motors in West Trenton, New Jersey. In 1963 Budd transferred to GM Headquarters in Detroit and later to Pontiac Motors in Pontiac, Michigan. In 1979, Helen and Budd retired and relocated to Sugarmill Woods in Homosassa, Florida. For many years they enjoyed golfing, socializing, and travelling. Those early retirement years were full of festivities with family and their new-found Florida friends. Helen was a dedicated wife, mother, and homemaker. She was an excellent cook and enjoyed preparing meals for family and friends. As a former nurse, she was always ready with antiseptic and bandages for a scraped knee or cut finger. After all the poking, prodding, cleaning, and bandaging, her sons claimed the treatment was usually worse than the injury. Helen was an active member in the United Methodist Church and was always ready to lend a hand to others. She enjoyed socializing, reading, crossword puzzles, and her family and extended family. She will be fondly remembered by family and friends as someone who always had a kind word and warm smile for everyone. On Monday, November 13th, visitation will be from 10:00 to 10:30 with a Celebration of Life Service at 10:30 a.m., at the Taylor & Modeen Funeral Home, 250 Center Street, Jupiter, FL 33458. Burial will commence at 2:00 at the Veteran’s South Florida National Cemetery in Lake Worth, Florida. Contributions in lieu of flowers may be mailed to the First United Methodist Church, 8831 W. Bradshaw St., Homosassa, FL 34448.

The family of Helen S. Hansen created this Life Tributes page to make it easy to share your memories.