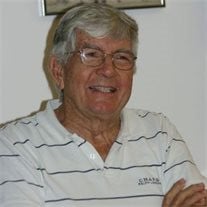 Grant Evans Age 87, of Jupiter, FL, Grant Evans passed away on Thursday, November 29, 2012 surrounded by his loving family. Grant Evans was born on October 21, 1925 in Etowah, TN to Newton and Sadie Evans. Two weeks later, they returned to Jacksonville, FL where he spent the majority of his youth. He was second born of five children. He was preceded in death by his brother, Joe, and sisters, Sadie and Ann. He is survived by his sister, Marjorie. At the youthful age of 17, he joined the Navy where he served his term during World War II. He received several honors, including Victory Medal, American Theatre, Asiatic-Pacific, and Navy Expert Pistol Shot. He stood number two out of his class of 241 men in his Aircrewmen Gunners Course. Following his Honorable Discharge, he attended Johnson Bible College for one year.While working his way through college as a logger, he then graduated from Northwest Christian College with a degree in Theology. Just before he graduated, he wrote a letter to Pratt & Whitney Aircraft telling them how much he admired the engines in the planes he flew in the war. They responded by offering him a job in West Palm Beach, FL where he stayed for 33 years until he retired in 1990. He raised and is survived by four children, Michelle, Steven, Angela and Robin. He is survived by his wife, Sue of nearly 25 years, with whom he also helped raise two children, David and Christopher, as well as two grandchildren, David and Andrew. Grant is also blessed with and survived by 16 grandchildren: April, Matthew, Shawna, Jennifer, Courtney, Jessica, Nicholas, David, Andrew, Paul, Zachery, Cally Jo, Ethan, Cami, Darren, and Cara. Logan is his only great-grandchild so far. Besides his love for his family, Grant also enjoyed camping, swimming, wind-surfing, fishing, archery and working with wood. His family is especially proud of his swimming medals and trophies. He was a top swimmer in the state of FL for the age 50-60 group. His memorial service will be held at Taylor and Modeen Funeral Home on Thursday, December 6, 2012 at 11:00 am. If you prefer, in lieu of flowers, you may send donations to St. Jude's Children's Hospital (www.stjude.org). For family members, there will be a Naval Memorial Service at the South FL National Cemetery on Friday. He was a devout Christian and planted the seed of faith in all his family and to anyone who would listen. He was deeply loved and will be greatly missed by all those who knew him.

The family of Grant Evans created this Life Tributes page to make it easy to share your memories.