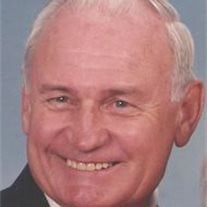 Glenn C. Fetter, 81, of Jupiter passed away Sunday, July 17, 2011. Born in Milwaukee, Wisconsin, Glenn moved to the Palm Beaches 64 years ago and never looked back. During his long residency in the county, Glenn distinguished himself in a myriad of ways, from raising his two children, Carole and Alan, to giving to many treasured causes—both local and national—to being recognized by his colleagues, customers, and friends as a man of great character, honesty, generosity, and humor. A self-made businessman, Glenn's family loved hearing him recount the story of how from the age of 16, he knew he wanted to own buildings and be a landlord. By the age of 21, Glenn had already surpassed his goals and continued his long, successful career loving every minute and never feeling that he had worked a day. For Glenn, work was pure pleasure and he never officially retired, even as his health waned over the past few months. President and CEO of Fetter Co., Glenn was an innovator in the warehouse development field. Glenn attributed much of his success to the power of positive thinking. He never tired of reminding his children that he went from a kid walking to school for miles uphill in the snow to a man characterized as the “Warehouse Wizard” by the Palm Beach Post in the 1960’s. We, his family, are also very proud of Glenn, although we harbor certain suspicions about the geographic location that made it possible to walk uphill in the snow, both to and from the school. “Time is money” was one of Glenn’s many favorite expressions. He generously donated both his time and money to his family, his church, charitable organizations, as well as any other individual whether he actually knew them or not, especially those who recognized a soft touch. He also served on the Design Control Board of Jonathan’s Landing and was the General Contractor for the Fellowship Hall and other wings of Trinity United Methodist Church in Palm Beach Gardens. In 1978, Glenn extended his family when he married the love of his life, Charlene O'Neal. Together they continued to grow Fetter Co., and on the 8th day they rested by traveling the entire world together! We’re fairly certain they didn’t miss a country, including Iceland in August 2006 when Glenn had to buy an emergency jacket because he wasn’t expecting it to be that cold in August. When in the United States, Glenn and Charlene almost always celebrated Christmas, Thanksgivings and assorted other holidays with their extended family. However, rumor has it that there were also a few unplanned family reunions in the ticket payment line at the Courthouse, where Glenn and the children he had taught to drive often bumped into each other. Aside from Fetter Co., family, and traveling, Glenn also loved the game of golf. During regular family dinners, Glenn would recount his golf game of the day, stroke by stroke, hole by hole. He professed puzzlement over the family’s sudden after-dinner plans, which usually started around the time he got to the 4th hole. A Braves baseball fan all his life, Glenn didn’t hesitate to throw the Braves under the bus when the Marlins came into existence. Glenn was loved and adored by his entire family. Words can not express how much we will all miss this gentle, caring, and loving man. His survivors include: his beloved wife Charlene, his children, Carole Fetter of Jupiter and Atlanta, and Glenn Alan Fetter and his wife, Loyce, of Palm Beach Gardens, Sharon O’Neal of Atlanta, GA, Mike O’Neal and his wife Patricia of Pensacola, FL, Kathy O'Neal Osvath and her husband Gabor of Charlottesville, VA. Grandchildren: Michael Mollick, Kelli O'Neal, Jonathan O'Neal, Alexandra Osvath, as well as 5 great grandchildren. His former wife, Shirley Fetter, also survives and has become a treasured member of Glenn's wonderful, extended family. The family will receive friends Wednesday, July 20, from 5-7 PM at the Taylor & Modeen Funeral Home. A Celebration of Glenn’s life will be held at 2:00 PM Thursday, July 21, 2011 at Trinity United Methodist Church in Palm Beach Gardens, conducted by the Pastor John Denmark. A reception in the Fellowship Hall will follow. In lieu of flowers, please make donations in Glenn's memory to Hospice of Palm Beach County, 5300 East Ave., West Palm Beach, FL 33407 or online at hpbcf.org. The care and support provided by Hospice allowed Glenn to pass away peacefully and his family to peacefully accept his passing. We will be forever grateful to them.

Glenn C. Fetter, 81, of Jupiter passed away Sunday, July 17, 2011. Born in Milwaukee, Wisconsin, Glenn moved to the Palm Beaches 64 years ago and never looked back. During his long residency in the county, Glenn distinguished himself in a myriad... View Obituary & Service Information

The family of Glenn Fetter created this Life Tributes page to make it easy to share your memories.