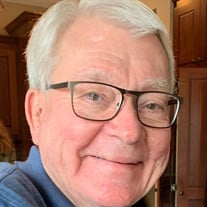 Gerald (Jerry) Bishop passed from death to life surrounded by his family on September 14, 2019. Jerry was 85 years old and is survived by his wife of 51 years, Susan (Sue) Bishop. Jerry had two sons, Mark (daughter-in-law Alison, grand-daughters Elle and Kate) and Michael (daughter-in-law Amber, grandsons Jackson and Hudson, grand-daughter Chloe, and grand-doggy Jet). Born in Gainesville, Jerry graduated from the University of Florida with a bachelor’s degree in Business Administration in 1956. After serving his country in the Navy for four years, Jerry began a career in Human Resources and was employed by the Boeing Company for 35 years retiring in 1999. Jerry was privileged to support Boeing’s operations at Kennedy Space Center from the Apollo missions through the Space Shuttle era. Along with raising a family, they were active members of Calvary Chapel of Merritt Island with Jerry serving as elder for many years. After retirement, Sue and Jerry moved to Keystone Heights, Florida and lived in a lovely lake house that they enjoyed for 15 years. While there, Sue and Jerry attended Community Church of Keystone Heights, worked at their rummage sale ministry, led a seniors fellowship group, and hosted their grandchildren on a regular basis. In 2014, Sue and Jerry moved to Jupiter, Florida to live near Michael and his family. They have been active volunteers at the Jupiter Medical Center Thrift Shop for several years and attend Generation Church where they have led a seniors fellowship group at their home. Jerry loved his Florida Gators and was an avid fan of all their sports teams. He enjoyed crossword puzzles, reading, taking care of his grand-doggy Jet, and spending time with his beloved Sue. In every aspect of his life, Jerry was a committed follower of Jesus Christ. He believed that the Bible was his foundation for living and had a discipline of daily prayer that he maintained for decades. Jerry provided quiet but direct leadership as an elder in the various churches in which he served. He also was someone who could be relied upon for his patient, listening ear, to offer wisdom, or just a simple word of encouragement. He embodied the fruit of the Spirit which is a testament to his deep faith. Jerry was our champion and we know he is enjoying his reward as a humble servant of Jesus. We look forward to the day of the resurrection “when our dying bodies have been transformed into bodies that will never die…death is swallowed up in victory. O death, where is your victory? O death, where is your sting?” 1 Corinthians 15:54,55

The family of Gerald Clifford Bishop created this Life Tributes page to make it easy to share your memories.

Gerald (Jerry) Bishop passed from death to life surrounded by...