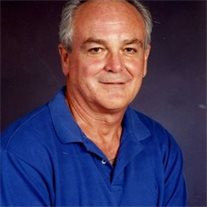 George Richard Bardorf departed this earthly life on Wednesday, February 2, 2011. He is survived by his loving wife of 47 years, Bernadette, “Bunny”; his sons, Christopher (Trisha) and Matthew (Marissa) of Jupiter, FL; one brother, Robert (Jean) of Tennessee; one sister, Florence (Ray) Atkison of Pinecrest, FL and many loving nieces and nephews. George was born in Hollis, NY on January 18, 1940 and was educated in New York City. He served his country on an aviation crew in the United States Navy then worked for many years in sales for Ingersoll Rand in the U.S. and South America. George went on to found Bardorf Construction, Inc. building homes in New York and later in Florida. He was an outstanding amateur athlete excelling in racquetball, handball and golf which became his passion. He had been a member of the Canyon Club in Armonk, NY and PGA National in Palm Beach. A devoted family man, he was a quiet but a generous mentor to many. In lieu of flowers, a donation is suggested to MDS Research Moffitt Cancer Center, 12902 Magnolia Drive, Tampa, FL 33612 or to the charity of your choice in loving memory of George Bardorf. A visitation will be held from 2-4 & 6-8PM, Friday, February 4, 2011 at Taylor & Modeen Funeral Home, 250 Center Street, Jupiter, FL. A Memorial Service will be held 10 AM, Saturday, February 5, 2011 at Taylor & Modeen Funeral Home, Jupiter, FL. Interment will follow at Riverside Memorial Park, Tequesta, FL. George will be sorely missed by all who loved him dearly.

The family of George Richard Bardorf created this Life Tributes page to make it easy to share your memories.