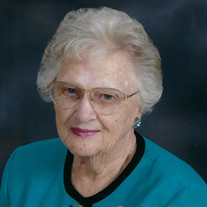 Genevieve Elvora Thurman Jones was born in Muren, Indiana, August 10, 1917 to James Elisha Cleveland Thurman and Anna Jane (Susie) Corn. Genevieve was the youngest of four children. She predeceased by her parents and three siblings, sister Detzel, brother Ora Condo and sister Myrtle Agatha. Genevieve married Kenneth Lester Jones June 18, 1936 in Ayshire, Indiana. Kenneth predeceased her December 2004. They had five sons two of which predeceased her: Ronald Lester of Jupiter, Florida, died December 2010 and Dickie Lee (Sandra Nye) of Ocala, Florida, died February 2019. Surviving sons are Kenneth Junior (Beth Thorne) of Jackson, Georgia, James Odell (Ellen Saeger) of Jupiter, Florida and Jerry Stephen (Helen Mann) of Pulaski, Tennessee. She was blessed with 14 grandchildren, 29 great grandchildren, numerous great, great grandchildren and several great, great step grandchildren. She is also survived by many nieces and nephews and great-nieces and great nephews. Her only surviving sister-in-law, Roberta Rembe, resides in Stuart, Florida. Kenneth and Genevieve moved to Jupiter, Florida, in 1958. Genevieve was a cafeteria worker at Pratt Whitney for a short time and was co-owner of Jones Texaco on the corner of Indiantown Road and Loxahatchee Drive which is now known as the Shell gas station in Jupiter. She enjoyed doing crossword puzzles, fishing and camping. Genevieve was a member of Grace Immanuel Bible Church (formerly First Southern Methodist Church) since August 9, 1959. She was a participant of the Women’s Missionary group and also taught Sunday School. She loved the church and all her church friends and consistently prayed for all of her family. All of the members of the Jones family praise the Lord for taking Genevieve home so peacefully. She is now home with her Savior. We would also like to thank Pastor George Ralph for his love for Genevieve and the family all these years.

The family of Genevieve Elvora Thurman Jones created this Life Tributes page to make it easy to share your memories.