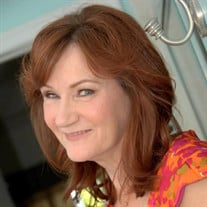 Gail Elaine Ganzlin passed away peacefully on Saturday, March 27th after a courageous, heroic, and miraculous 22-year battle with metastatic breast cancer. The cancer never stood a chance against her joie di-vivre (exuberant enjoyment for life) which lives on in her works of art, her publications, her non-profit contributions and most importantly, in the lives of her family and friends. Gail was born on February 24th, 1957 in Milwaukee, WI to Gordon and Mary Lou (Raburn) Clausing. She was the second oldest of the five “G-Siblings” which include Brothers, Glenn (Judy) Clausing of Cary, NC, Gary (Maria) Clausing of Cedarburg, WI and Sisters, Gloria (Joe) Steib of Tequesta, FL and Gina (Jeff) Leider of Cedar Grove, WI. Nieces and Nephews include Bryan, Derek, and Alison Clausing, Jenna and Evan Clausing, Sara (Blake) Stelmacki, Joshua (Jenn) Steib, Carol Jean, Austin, and Cassidy Leider. In a true testament of love, Gail was married to Michael Ganzlin for 44 years. They met at the grocery store in Milwaukee where they both worked, she was 17 and Michael was 21 and they were inseparable from the start. They had 2 daughters, Melissa Collier and Megan (Mickey) Finn and five Grandchildren, Mason and Charlotte Collier and Nolan, Parker and Magnolia Finn that lovingly called her Gamma at her request, after years of radiation treatments. Always an artist at heart, Gail owned a custom clothing design company (Sugar Magnolia) while raising her daughters and continuing her schooling. She went on to graduate with her Bachelor of Fine Arts degree from Florida Atlantic University in 1997 at 40 years old, something she was very proud of. Shortly after, she began her own successful graphic design company (2G Design) in Jupiter, FL which she had for 15 years. She was actively involved with the Cancer Alliance of Help and Hope which is dedicated to supporting Cancer patients in need of financial assistance, a cause very near and dear to her heart. Creativity was her soul-keeper and included hobbies such as Watercolor painting, Sewing, Furniture making, Cooking and Photography. She also had a love of music, yoga, and the ocean as they brought her great peace amid her cancer battle. She was the author of 2 books including Gail Force, written to offer an encouraging memoir of hope for those also fighting metastatic breast cancer. Gail was a true source of inspiration and grace to anyone that met her, especially those that witnessed her courageous strength throughout her cancer battle. Her body is now free from pain, but her loving spirit will be missed greatly by those that she leaves behind. Her earthly happy place was being surrounded by family and friends, but we know that she is in her eternal happy place with the Lord. A Celebration of Life will be held at the Jupiter Civic Center on Friday, April 23rd from 6:00-8:00pm. In lieu of flowers, please consider donating to Trustbridge Hospice of Palm Beach County or Cancer Alliance of Help and Hope.

The family of Gail Elaine Ganzlin created this Life Tributes page to make it easy to share your memories.