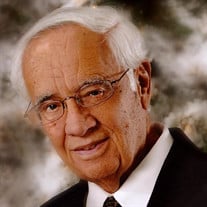 Fred R. Lowe, 83, passed away Friday, September 14th, after a brave, hard-fought battle with cancer. Fred was born in 1935 in Spencer, West (By-God) Virginia. He attended Ohio University where he played baseball and basketball. Out of college Fred signed a contract with the Cincinnati Reds and pitched for the team for three years. Fred's athletic achievements in his younger years were followed-up, and even surpassed, by a long and successful career in the financial services and insurance industries, where he served as President and Chief Executive Officer of a number of financial services companies in the State of Florida. Prior to his retirement in 2008, Fred was the President, Chief Executive Officer and Chairman of the Board of AmCOMP, Incorporated, a publicly-traded casualty insurance holding company (headquartered in North Palm Beach, FL,) specializing in workers' compensation and employers' liability insurance. Fred was also Chairman of AmCOMP's two insurance company subsidiaries: AmCOMP Preferred Insurance Company, and AmCOMP Assurance Corporation. He led the transformation of the companies from private investor ownership in 1977 to a successful public stock offering in 2005. Thereafter, in October 2008, after continuing to oversee the growth of the companies, Fred guided AmCOMP to a successful sale and merger with Employers Holdings, Inc. of Reno, Nevada. Fred enjoyed spending time with his beloved, very well-behaved hunting dogs. He was an avid golfer and loved to read. Fred's passion though was the stockmarket, whether he was buying or selling stocks. But on occasion, Fred had a real thrill when playing Blackjack. Upon Fred's retirement in 2008 he and Eleanor enjoyed dividing their time between their residences in Tequesta and in North Carolina, where Fred could be found sitting on the porch with a pint of ice cream. Fred is survived by his wife, Eleanor; his daughter, BethAnn (Mitch) Chavira; his son, Gregory (Sabrina) Lowe; Patricia Walsh; and Eleanor (Thor) Evensen; his grandchildren Monica, Gabrielle and Cole Chavira; Kathleen (Erik) Herman; Griffin and Nolan Eyles; and his great-grandchidren Luca and Bennett Herman; his brother, Steven (Virginia) Lowe; and his niece and nephews. Fred is predeceased by his mother, Anne and his father, Bruce Lowe; his brother, Robert Lowe; and his daughter, Karen Lowe DeAngelis. The family will receive friends from 5:00-7:00 p.m. on Wednesday, September 19, 2018, at Taylor & Modeen Funeral Home, 250 Center Street, Jupiter, FL. A funeral service will be held on Thursday, September 20th, place and time to be announced. Committal service will follow in Riverside Memorial Park, Tequesta, FL. Online condolences may be offered at www.taylorandmodeen.com.

The family of Frederick R. Lowe created this Life Tributes page to make it easy to share your memories.