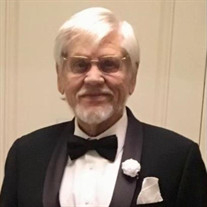 Jupiter, Florida - Dr. Fred R. Landrum, 88, died unexpectedly January 15, 2021 at the Jupiter Medical Center. He was born August 14, 1932 in Rainelle, West Virginia, the youngest of four children of Leslie and Hildriah Landrum. Fred graduated from the Rainelle High School, class of 1950. As a high school student, he lettered in football and baseball, and spent time helping his dad in his shoe shop and cinder block plant. During his teenage years in the mountains of West Virginia Fred enjoyed fishing, hunting, and trapping. He loved nature and respected all the outdoors. Following his graduation from high school Fred solo hitchhiked across the country on two different occasions falling short of a dream of making it to Alaska before deciding to serve his county as a United States Marine, enlisting in 1951. After completing boot camp at Paris Island, South Carolina and advanced Infantry training at Camp Pendleton, California. Fred served active duty in Korea where he earned the rank of Sargent before being honorably discharged in 1954. Upon returning from Korea he married his high school sweetheart Adrienne “Sity” Ann Camp and settled in Morgantown, WV. Following his graduation from the West Virginia University in June 1958, where he earned a degree in mechanical engineering, Fred and Sity, along with their two young sons, Michael and Gregory, moved to Jupiter, Florida where they eventually designed and built their current home of 53 years. Fred Began employment with Pratt & Whitney Aircraft, and in that capacity, he worked on a variety of highly classified and top-secret projects as a defense contractor including the space shuttle and Lockheed SR-71 Black Bird aircraft. He retired from Pratt & Whitney after 23 years as a mechanical and analytical engineer, ending his tenure as the Manager of Strategic Planning. During his career at Pratt & Whitney Fred studied at the Massachusetts Institute of Technology and Florida Atlantic University where he earned a Masters Degree in Business Administration (MBA) and Doctorate in Education (Ed.D). Fred taught undergraduate and graduate courses at the Florida Atlantic University in Boca Raton, Florida as an adjunct professor in the College of Business for more than 20 years. Fred opened Business Planning Associates, Inc. a Management consulting firm in 1980 and worked with a number of small businesses to Fortune 500 companies traveling to South Africa on two occasions for British Petroleum. He became active in the Arts and was involved with the Norton Art Gallery among others. As one of the relatively few families in Jupiter in 1959, Fred became active in a variety of community development activities involving his church, growth management, Jupiter/Tequesta Athletics, and environmental conservancy. He coached Little League and Pony League baseball for many years. Fred stood tall for the rights of others and on one occasion threatened to withdraw his team from the league when they would not allow him to have a black player on his team. As a loving and involved father, Fred also served as Cubmaster and Scoutmaster for Troops 119 and 151 where through his spiritual guidance, leadership and shaping young boys into young men. He was an educator, teacher, leader, storyteller, author, artist and civil war historian making several planned trips to numerous civil war sites and museums with his sons and grandsons. Fred was a true hero and friend to all. In addition to his parents, Fred is preceded in death by two his sisters Margaret and Ruth, brother Leslie (Bud) Landrum, and grandson Dr. Ian Michael Landrum, a clinical psychologist. Surviving in addition to his wife Adrienne “Sity” Landrum of nearly 69 years, are sons Michael Ray Landrum and his wife Christine, Dr. Gregory Camp Landrum and his wife Linda, grandson Evan Christopher Landrum also a mechanical engineer, and his wife Sara, and two great granddaughters Sidney and Mackenzie.

The family of Fred Ray Landrum created this Life Tributes page to make it easy to share your memories.