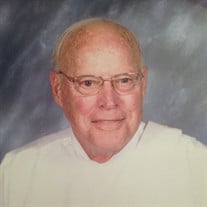 Frank William Loafman, 92, of Jupiter, Florida passed away Saturday, October 28, 2017. Frank was born May 17, 1925 in Detroit, Michigan to Webster and Myrtle (Younger) Loafman. He graduated from Southeastern High School. He enlisted in 1943 into the U.S. Army Air Corp, where he trained as a pilot and command gunner. Following his honorable discharge from the military, on October 23, 1948 he married the love of his life, Loyola (Mihalek) Loafman. Shortly thereafter, he completed his Bachelors degree at Wayne State University. Following his studies at the Archdiocese of Detroit’s Diaconate Program, he was ordained, 1971, as a Deacon of the Roman Catholic Church, and serving many years in the Knights of Columbus. Upon retiring from the Detroit Edison Co., he devoted himself to his parish communities of which he served faithfully. Frank was an example of faithfulness and servitude to his Lord, wife, children, grandchildren and great-grandchildren. In his spare time, he enjoyed boating, fishing, reading, and golf. Frank is survived by his wife Loyola of 69 years, daughter Kathleen (Robert) Cischke, and four sons William (Jasmine) Loafman, John (Jackie) Loafman, Thomas (Karen) Loafman, and Robert Loafman. He is also survived by many loving grandchildren and great-grandchildren. A visitation will take place on Wednesday, November 1st from 5:00pm – 7:00pm at Taylor & Modeen Funeral Home in Jupiter, Florida. On Thursday, November 2nd, a church service will be held at 10:00am at St. Joseph’s Catholic Church in Stuart, Florida. Burial will follow at Riverside Memorial Park, Tequesta, Florida.

Frank William Loafman, 92, of Jupiter, Florida passed away Saturday, October 28, 2017. Frank was born May 17, 1925 in Detroit, Michigan to Webster and Myrtle (Younger) Loafman. He graduated from Southeastern High School. He enlisted in 1943... View Obituary & Service Information

The family of Frank William Loafman created this Life Tributes page to make it easy to share your memories.