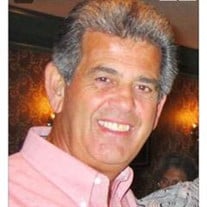 Frank Altrui passed away suddenly on February 27, 2022, leaving behind shocked and stunned family and friends. He was truly loved and will be missed. The only comfort, he left on his son Frankie Jr.’s birth date, predeceased in 2016. Frank was the son of Peter and Josephine Altrui, brother to Grace, Ellen, Pete, all predeceased. He was a Vermont man through and through; first generation Italian born and raised in “the gut” by immigrant parents. He was born at the Rutland hospital July 9, 1942, a funny kid, class clown and practical joker. Frank told funny stories about his childhood, attending catholic school, running with the Pine Hill Gang and training Seta his show dog. He loved summers on Lake Bomoseen, water skiing, sailing and girls. He talked about “hunting” and snow mobile expeditions at the Mendon Mountain camp, family pasta nights, barbecues and bocce tournaments. Frank needed to stay busy and feel productive. After four years in the Navy, he attended Champlain College with his younger brother. Upon graduation, he joined the family real estate business, married his college sweetheart, Judy (predeceased 2012) and had two daughters, Jodi and Tami. A natural salesman, Frank quickly learned the ropes from his father and Dale Carnegie. He franchised the business after his parents retired, becoming one of the top companies in Vermont. Active in his community, he was a member of many organizations and past President of Kiwanis. He was in AA living sober over 35 years, helping others do the same. He truly made a difference, never judged, and was generous with his time. Frank loved vacationing with second wife, Roxanne, and their two children Jessica and Frankie. Like his mother and father, Frank enjoyed the beach, sunbathing and eventually retired to Florida with his family. In 1999, he purchased property in Jupiter and began to spend winters. He sported a tan year around, kept a full head of hair, and appreciated the relaxing fit of Tommy Bahama. He looked and behaved much younger than a man approaching 80. Besides smelling great, he had an exuberant personality. He was never bored! He helped with the family apiary business, a great spokesperson for bees and honey! He liked running the commercial lawn mower, taking employees out for Taco Tuesdays, and escaping the Florida heat to spend summers in Vermont. Frank’s last week of life was spent living. He biked, played pickle ball and stacked wood. He also delivered honey, went out to dinner with a close friend and played a couple rounds of golf. He danced with Roxanne in the kitchen and spent time with his children and grandchildren. Out of the blue he called friends to touch base, reminiscing and sharing memories. Reminding all, that “aging is not for wimps”. Frank’s surviving relatives include wife, Roxanne Altrui, daughters Jodi Caggige, Tami Napolitano and Jessica Altrui, son in law Scott Caggige, grandchildren Mike Napolitano, Mark Napolitano, Kayla Napolitano Cannon, Courtney Caggige, Brittney Caggige, and great granddaughter, Maria Bella Cannon, sister Anita Hughes of Fairhaven, VT and several cousins, nephews and nieces. In lieu of flowers, please make donations to Frankie and The Bees (a registered 501c3) PO Box 1551, Rutland, Vermont 05702. A memorial celebration will be held at The Lake Bomoseen Lodge in Vermont on April 10th, starting at noon.

Frank Altrui passed away suddenly on February 27, 2022, leaving behind shocked and stunned family and friends. He was truly loved and will be missed. The only comfort, he left on his son Frankie Jr.&#8217;s birth date, predeceased in 2016. Frank... View Obituary & Service Information

The family of Frank Altrui created this Life Tributes page to make it easy to share your memories.