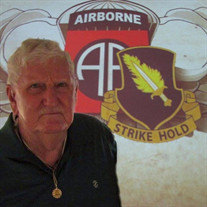 Keefe, Francis Xavier Francis Xavier Keefe, 96 years old, of Jupiter Florida, passed away on April 29th, 2021. Francis was born Born in Jersey City September 16, 1924 raised in Greenwich Village NY. Francis enlisted in the United States Army in 1940 until 1941 then reenlisted In 1942 Francis enlisted in the United States Army and served in the 82nd Airborne 504th (PIR). I Company during WW2. He served heroically with the 82nd throughout the war and was decorated. He was wounded in Nijmegen on September 20th 1944 during Operation Market Garden. Francis served with distinction and was awarded the European African Middle Eastern Campaign Ribbon along with Bronze Stars for Valor, Purple Heart, Combat Infantry Badge, Good Conduct Medal, Distinguished Unit Badge, Parachutist’s Badge, Bronze Service Arrowhead, and American Defense Service Medal. After the War Francis remained very involved in POW and MIA, and many other Veterans issues. Francis worked hard at continuing to preserve the memories and records of the historic actions of the 504 (PIR) and the Allied Airborne during the war. Francis was also a very active member of the Catholic Church. Francis was happily married for 50 years to Beatrice Keefe. They resided in Staten Island NY until they retired to Jupiter, Florida in 1984. Beatrice passed in 2000. Francis then remarried Elieen Luginsland who he is survived by. Francis and Beatrice are survived by his children; Dennis (Cheryl), Lawrence (Donna), Thomas (Elaine), Teresa (Chris) Susalis, William (Denise), and William (Carol) Stenson. Francis is also survived by 16 Grandchildren 20 Great Grandchildren as well as his latest miracle great great grandchild Alexian Acevedo Jr. Francis is preceded in death by his father William and mother Mary as well as his brothers; William, Hughe, George, Charles as well as Sisters; Isabel, Marie, Bernadette, and Rosemary. Francis is survived by his sisters Patrica Madden, Margaret Burk as well as numerous nieces and nephews. A Wake is to be held at Taylor and Modeen Funeral Home, 250 Center St. Jupiter Florida on Monday, May 10th from 6 PM to 8 PM and also on Tuesday, May 11th from 2 PM to 4 PM and 6 PM to 8 PM. Funeral service with a mass to follow on Wednesday, May 12th at 10 AM at St Jude Catholic Church, 204 N. US1, Tequesta, FL In lieu of Flowers the family requests any donations to be made to the 82nd Airborne Wounded Warrior Project. https://www.82ndairborneassociation.org/phone/donate.html

The family of Francis Xavier Keefe created this Life Tributes page to make it easy to share your memories.